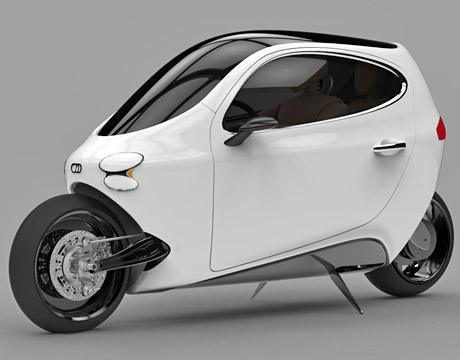 Out of it came the start of the C-1, an electricmotorcycle being designed in many ways like a car—maybe the most recognizable onebeing that it’s self-enclosed. But it’s also trying to deal with one of the most difficult elementsof motorcycle design: balance.

The C-1 motorcycle attempts to deal with this through gyroscopic technology. Eric Stromswold, vice president for CMG Systems for Lit Motors, the company behind the C-1, fills us in. “It’s an all-electric self-balancing motorcycle…” he says. “Basically, the control moment gyros (CMGs) are allowing it to be driven like a car and to actively balance when it stops. There are actually two gyroscopes … one can be a backup for the other.”

A CMG has the benefit in that it can get far more torque out for far less power, Stromswold says. “So rather than speeding up and slowing down the flywheel, you’re keeping the flywheel at same speed but you’re changing the pointing direction of the CMGs of the flywheel.” It also has an automatic kick stand there to stabilize the bike.

According to the Lit Motors’ website, the C-1 uses “high-torque in-hub electric motors,” a kinetic energy recovery system storing the energy in the gyro flywheels. It also says the motorcycle maintains stability as it leans itself into and out of turns.

According to Kim, who is the CEO/CTO for Lit Motors, among the goals for the motorcycle is to be able to go 0-60 mph in less than 6 seconds and have a range of 200 miles per charge. “To me, making the range as good as it can be is the more important of the two,” he says. “I want people to really have a good long experience.”

Kim won’t put an exact date on when to expect to see the C-1 in production but is optimistic about the results he’s seen thus far. “We’ve done several tests and there’s still a lot to do, mostly on higher speed driving,” Kim says of the bike, which, like many motorcycles, can fit a second person behind the driver. “We hope we can, in some way, change the world through this and change the way we look at how we use technology to better our lives and have a more sustainable means of transportation. It’s also a new vehicle to identify with.”

He’s also excited about someone being able to call themselves a motorcyclist with added safety. “Motorcycle accidents can have you flying off the bike where you don’t know how you’re going to land or what you’ll hit on the way down,” he says. “A fully enclosed cabin is a controlled environment. That's just one of the great things about this.”

It’s an all-electric self-balancing motorcycle…Basically, the controlled Momo gyros are allowing it to be driven like a car and to actively balance when it stops.Eric Stromswold, VP for CMG Systems, Lit Motors