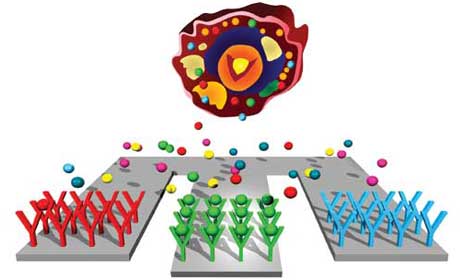 Fighting Cancer as a Mechanical Disease

Cancers are typically categorized by site of origin, such as brain, breast, and lung. Molecular medicine has revealed, however, that cancers are best identified by presence of biological molecules (such as proteins) in cells, on cell surfaces, and in bodily fluids. Moreover, mechanical engineering and engineering mechanics at the nanoscale is aiding early and accurate oncological diagnosis and treatment.

For instance, structural mechanics has entered cancer diagnostics. Arrays of micromachined cantilever beams, dotted with antibody molecules that link to specific antigens or conjugate molecules, deflect and change their resonant frequencies when the antibodies bind to the antigen proteins of cancer markers.

Moreover, solid and fluid mechanics have entered cancer therapy. Cancers and the surrounding tissues in the “cancer microenvironment” generally develop internal hydrostatic pressure distributions that oppose the transport of therapeutic drugs from the blood stream into the cancer, diminishing the efficacy of treatment. New therapeutic approaches are being developed to overcome the pressure gauntlets.

Our own laboratories in Berkeley, Ohio State, and now in Houston have pioneered understanding of nanofluidics--mass transport inside nanopores and nanochannels.

Nanochannel systems in capsules can be implanted in the body to release anticancer drugs either at a controlled constant rate, or at a time-variable rate according to a preprogrammed profile. The ultimate goal is a self-regulated system comprising on-board sensors, intelligence, and the release actuators—essentially, a biomimetic, mechanically engineered “nanogland” that releases drugs only when needed, and at a required small local concentration (rather than flooding the body).

Thus, insight into a deep connection between mechanics and cancer has recently emerged. Since the discovery of simple machines, one of the fundamental concerns of mechanics is the transport of mass. If we use the word mechanical in this sense (rather than in the medical sense of relating to mechanisms of biological action), then I can make a radical and potentially revolutionary statement: Cancer is a disease of mass transport dysregulation.

What makes a cancer a cancer? About ten years ago Douglas Hanahan, now at the University of California, San Francisco, and Robert A. Weinberg at the Massachusetts Institute of Technology, identified six major hallmarks of cancer now widely accepted.

The second hallmark is angiogenesis: the generation of new blood vessels to feed cancer growth, profoundly changing the dynamics of mass transport at the tissue level. Without angiogenesis, cancer would be largely localized, and therefore generally curable.

The four remaining hallmarks—insensitivity to anti-growth signals, the ability of cancer cells to excite their own population growth, resistance to preprogrammed cell death (apoptosis), and limitless cell replication potential—all depend on how signals are transported within cells and between cells.

Unlike human signals, which are directed from point to point, biological signals are carried by molecules that are released into the general environment inside or outside of the originating cell, or shed in the blood stream. Although they are not directional, they “know” when they get to their intended location, because they have molecular components that dock with high lock-and-key specificity to target molecular counterparts. This docking in itself is the message transmission: it may encode a request to enhance cell proliferation, or resist preprogrammed death, or some other activity.

Thus, molecular signaling is really a mass transport phenomenon. And cancer is emerging as a disease of mass transport dysregulation, from the molecular to the cellular, to the tissue, organ, and organism levels. To use an expression familiar to mechanical engineers, cancer can be viewed as a multi-scale mechanics problem in mass transport.

A new generation of nanotech therapies are fighting cancer by overcoming biological barriers. Lipid-based nanoparticles, or liposomes, are effective because angiogenic blood vessels supplying tumors are “leaky” and permeable to nanoparticles, while normal vasculature is not. Thus, nanoparticle formulations of drugs concentrate in tumor lesions, reducing dispersion in healthy parts of the body and yielding lower adverse side effects.

Any drug—nano or conventional—injected into the general circulation of a cancer patient must overcome all biobarriers in sequence to be able to discharge its therapeutic effect on the target lesions. Thus, a new field is emerging, termed “transport oncophysics,” that focuses on understanding the mass transport properties and time dynamics of evolution of biological barriers.

The tools of the mechanical engineer are suited for understanding and defeating this insidious foe.

Cancer is a disease of mass transport dysregulation.