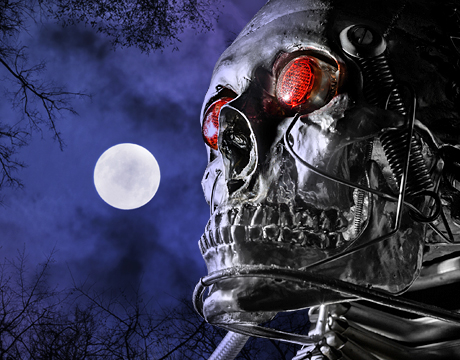 But there’s something else a slice of the population is interested in when it comes to this charming holiday: Being scared. Terrified even.

And few things do that better than the time-honored tradition of the haunted house, many of which arise for a limited time, trying to turn someone’s town into Fearsville. Monsters, gore, and craziness pop out at visitors, but the fact is, those objects and monsters don’t go flying around by themselves.

“The truth is it can be simple or more complicated,” says Rich Hanf, who was owner of “House of the Living Dead” in Lake Grove, NY and is now Horror Master (similar to a director) of “Fright Trail” in Scott, LA. “A mechanical creature, for example, can be motor driven, with two big flywheels, for instance, and you don’t see the monofilament line, and it’s going in a line. You can also use simple weights and pulleys.”

Animatronics are also a popular mainstay. “That’s air driven and has to do with pistons,” he says. “For instance, let’s say you have a scissor jack, almost like what would put under the car to change a flat tire. Suppose the bottom of it was against the wall and, instead of cranking it, pistons will throw the scissor jack out of the way and back. You can have scares coming out. These pistons are connected to compressors because it’s air driven but it’s also connected to controllers. They tell solenoids when to open and when to shut and solenoids determine when air goes out and where it goes to.”

He estimates the more complicated animatronics will use around 15 or 20 pistons.

One animatronics example he loves is a werewolf he’s worked with that has a 90 degree turn. “It’s laser-triggered. The reflector goes back to the laser,” he says. “When someone walks through, it breaks that laser beam and that triggers the event and now the werewolf is eight or ten feet high hovering over you and it’s snarling at you.”

He says the big challenge can be preserving it. “When you have something outdoors, you’re needing to cover it well, putting ant poison around it or putting it in plexi-boxes to keep moisture out,” he says. “People might think about the technology holding up, but what about the elements?” Even indoor setups aren’t immune. Just one issue is keeping the water from the air compressor from getting into the valves and pistons because it can result in rust, says Steve Bailey, owner of “The Haunted Scare House” in Wharton, NJ.

But the machines are only as effective as the understanding of psychology. “You have to understand how to time the scares, how to space them out,” he says. “You need to also keep a distance so the next group doesn’t already see the group ahead being frightened and having the scare ruined for them. But when it’s working well and you see a thousand people in your queue and everyone is being frightened and having a great time, it’s what makes this job worth it. When business is bad? Now that’s scary.”

But when it’s working well and you see a thousand people in your queue and everyone is being frightened and having a great time, it’s what makes this job worth it. Rich Hanf, Horror Master