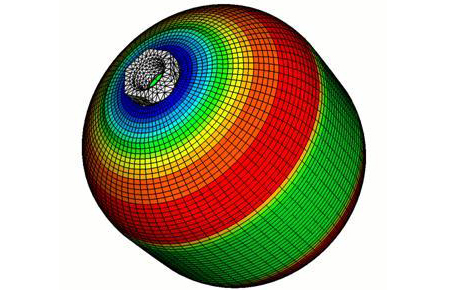 FEA: Only as Good as the Operator

Modeling how products, buildings, and structures hold up under everyday use involves solving intractable partial differential equations that calculate stresses under myriad loads.

For example, it may be necessary to model the weight of a 300-lb man on a plastic chair, a ship crashing into a bridge abutment, and more.

Finite element analysis (FEA) models complex structures by approximating the nearly infinite deformations and changes in a structure as it undergoes stress.

“We can live with the error that approximations like FEA introduce because so few problems to which it is applied can be solved directly,” comments Victor Kaliakin, professor of civil engineering at the University of Delaware.

FEA most commonly analyzes for structural failure by predicting potential trouble such as a toy fracturing in a child’s hand or a roadway buckling on a hot summer day. The technique has revolutionized product testing by reducing the time and cost of prototyping or physical testing.

The automotive industry used to crash-test hundreds of prototype models per year. FEA allows them to destroy a lot fewer cars, while learning more about materials and engineering than ever before. “FEA analyses of complex structures like cars often spins off in several directions, spawning a lot of questions along the way,” Prof. Kaliakin says.

FEA uses a 3D, CAD drawing to generate a grid, known as a mesh, which reduces the design into small, discrete, continuous regions, or nodes, into which material and structural properties are imported. Regions of high detail, or high anticipated stress, require higher node density than noncritical areas. Greater detail provides more faithful representations but entails a heavier calculation burden.

Garbage in, Garbage out

FEA traces back to Richard Courant, a mathematical physicist and Nazi-era refugee whose relevant work occurred at New York University during the early 1940s. Subsequently, mathematicians and engineers provided FEA with a robust scientific foundation that made it broadly applicable to engineering problems.

Once the exclusive domain of supercomputers and Ph.D.-level experts, FEA is now accessible to any computer-savvy engineer. Whether that’s such a great idea is open to debate.

Numerous commercial and public-domain software packages can drop 3D drawings directly into an FEA engine. “Modeling a structure these days is incredibly easy, but you still need to justify your answers,” Prof. Kaliakin warns.

Representations that overly distort when loads are applied, or stress concentrations that change significantly over short distances, are tipoffs that something is wrong with the model. Where inexperienced engineers accept the model at face value, an experienced modeler may decide to add more elements in critical regions and re-mesh.

“It’s all about simulation,” says Steve Remy, PE principal at Concinity Product Design and Engineering, New York, NY, a consumer, medical, and industrial product design firm. “FEA reduces the burden of hand calculations and iterative prototyping in product design. But you will still need to make a confirmation prototype at the end. It’s easy to generate a neat-looking model with really pretty colors and get totally bogus results.”

Remy suggests that modelers perform simple hand calculations to get an idea of the order of magnitude of the anticipated outputs. “Then, when results say a part is ten times stronger or weaker than the estimates, an experienced engineer’s savvy or preliminary calculations will tell him something is fishy.”

Jed E. Marquart, Ph.D., P.E., professor of mechanical engineering at Ohio Northern University, frequently tests his students by throwing curveballs into homework problems, to assure that results will be unreasonable. “It’s too easy to get a solution that appears OK but is totally incorrect.”

Prof. Marquart’s students use FEA to model radio-controlled airplanes for the SAE Aerodesign Competition, where the winner is the plane that can lift the most “cargo.” Marquart’s group also used FEA to model a Baja racing vehicle for the SAE Baja competition. “FEA enabled them to design the entire Baja vehicle, and lighten the vehicle considerably without loss of structural integrity,” he says.

Prof. Marquart himself has used FEA in his consulting work on piping systems, his specialty, and for hip and knee implants.

In the right hands, FEA can save months of grunt work and lead to heightened understanding of engineering structures and, perhaps, engineering itself. But like any other tool, it is only as good as the operator.

Angelo DePalma is an independent writer.