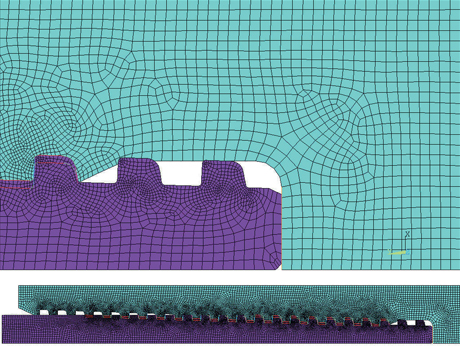 FEA and the Question of Credibility

Finite Element Analysis (FEA) is designed to save money and time by computerizing engineering analysis.

FEA is a digital way to test designs against predictable forces, to determine whether a design will fail and, if so, when and how the material will deform, snap, or collapse.

As a central part of engineering analysis, FEA also helps ensure against risky under-design and costly over-design. Finite element analysis has migrated over the years from a purely academic pursuit into everyday product development.

FEA does not eliminate the need for prototypes, but it can shorten the process. Often only one or two prototypes need to be built and tested before anything new goes into production. Digital prototyping also allows designers to quickly dig into more design options.

Models are built up from finite, discrete elements—anywhere from a few thousand to hundreds of millions. Hundreds of different elements cover most possible calculations of mechanical properties found in the real world.

In addition to the geometric shapes, hundreds of other elements have been created for specific problems—for pressure or bending, for example. Additional elements represent plastics, rubber, ceramics, concrete, masonry, aerospace composites, and other materials. Some of these elements are “idealizations” that embody a particular engineering concept. Some idealized elements have more than 100 nodes and as many as 11 degrees of freedom per node.

Meshing converts design geometry into FEA elements—digital Lego blocks. In FEA, mesh is the network of elements linked at their nodes and with loads properly applied. This is where calculations are done. The more dense the mesh, the more realistic and more accurate the solution. Even on the speediest hardware, very large FEA models may require days of nonstop number crunching. FEA calculates effects of loading at each node of every element with thousands or millions of simultaneous differential equations.

The biggest challenge in FEA is validation, carefully chosen and closely monitored physical tests that confirm whether or not physical reality and virtual reality line up.

A consensus among FEA analysts is that validation ensures that there are no hidden disconnects between the model and the physical testing, that correct physical properties are used, and that properties are analyzed accurately based on correct principles of physics.

Simulations have become so incredibly comprehensive that it is no longer possible to establish confidence in these models by using simple engineering judgment or hand calculations. The physical tests are critical for credible analyses.

As in any other engineering analysis, FEA model builders often have to deal with unknowns such as exact loads on the exterior surfaces of modeled objects. The solution is straightforward: Make sure that worst-case and best-case models are built and then err on the side of safety.

According to its practitioners, FEA is useful wherever the risk of material failure or engineering error has serious consequences—any of the legal, regulatory and bottom-line ramifications of product failure. They also point out that credibility lies at the heart of the every simulation effort, FEA or otherwise.

[Adapted from “The Question of Credibility” by Jack Thornton, for Mechanical Engineering, May 2010.]

FEA does not eliminate the need for prototypes, but it can shorten the process. Often only one or two prototypes need to be built and tested before anything new goes into production.