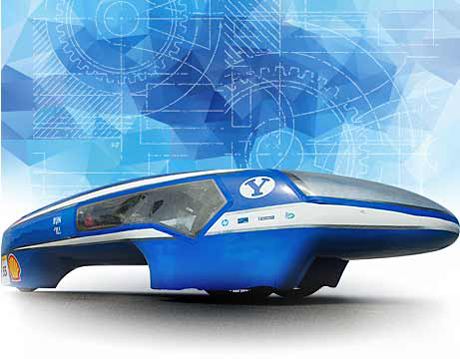 It’s a point of pride to talk about getting great mileage from your vehicle these days. But to those with a puffed-out chest talking up their hybrid or electric cars, well, consider the “supermileage” vehicle creators something of a punch to the gut. These slower vehicles may not be flooding the highways anytime soon, but 1,000 mpg is nothing to scoff at.

Cory Newton helped make one of these vehicles, which run on fuel, come to life. “We did the supermileage vehicle as a capstone senior project for our mechanical engineering degree,” says Newton, who received his diploma this year at Brigham Young University, Provo, UT, and now will pursue his M.S. degree in mechanical engineering there as well. “The single goal of it is to obtain high gas mileage where a normal car has many goals. If that’s my goal going in then you should be going with rigid carbon fiber. You won’t be doing anything over 35 mph and average around 15 mph. It also means you don’t want to have heavy duty tires.”

Newton’s team wanted to decrease their rolling resistance to as close to zero as possible, which meant everything from talking to bicycle shops to talking with those in the top levels of competitive cycling. “We wanted to try tubeless tires to reduce friction and did research on our bearings,” he says. “Not only on which ones to buy and materials but also how much to lubricate them, the process of cleaning of them.” Rolling resistance would increase if the car flexed, he says, so they wanted to make it as rigid as possible to keep the driver from creating a flexed state.

“For engine efficiency, we modified the head of the engine to give a high compression ratio,” says Newtown. “We also rebuilt the shell this year and dropped the weight by decreasing wall resistance and integrated the train and all the structural numbers of the car right into the carbon fiber body.”

For aerodynamics, he said improvements to laying up the carbon fiber meant less trip lines and places for air to be caught and captured.

Despite improvements, there would be low points, one of which was a reminder of function over fashion. “Our hatch design was a really cool design because it clicked in and was sleek looking. But it allowed very little access to the engine and back wheel,” he says. “Those are key systems that you want to have access to on all sides of the engine. A previous design allowed us to remove much of the shell in the back and we’ve made suggestions for future iterations of the car based on what we shouldn’t have done.”

In the end, their work resulted in 1,716 mpg as their high mark in competition.

Too tall to be considered for the driver—their actual driver was 5' 6"—Newton still managed to wedge himself inside for a bird’s eye view before all was said and done. He still can’t get over how low to the ground he was. “You’re sitting on the carbon fiber just inches above the ground and lean your head right against the firewall,” he says. “And there’s maybe a half an inch of firewall: a combination of honeycomb, carbon fiber, small aluminum plate, and some air separating you from this loud and powerful engine.”

But what Newton takes with him beyond the feeling of accomplishment is understanding even better what it takes to work with a team. “It was very intense,” he says. “But we bonded together and learned to work with each other. I learned a lot.”

For Further Discussion
The single goal of it is to obtain high gas mileage where a normal car has many goals.Cory Newton, student, Brigham Young University