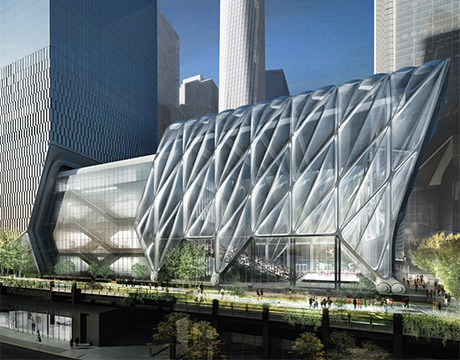 Two rack-and-pinion drive systems on the roof of the fixed building work like gantry cranes to move the 4,040-ton telescopic shell. Image: DS+R

Like most people trying to do big things in a crowded city, the architects and engineers at Diller Scofidio + Renfro had a problem with space.

DS+R was designing a high-profile cultural center for the emerging Hudson Yards development in New York City. The main building allowed only 10,000 square feet of performance space, not quite big enough to accommodate large-scale events. But the property also included 20,000 square feet of open public space that was approved for outdoor performances. The architects wanted to incorporate that land into the building design, thereby doubling the center’s year-round performance space.

The company’s answer: The Shed, a moveable building that combines classic engineering and unique design elements.

The Shed, which will be run by a nonprofit by the same name, includes a six-level fixed building and a light-weight, transparent shell that measures 135 feet by 125 feet and is 115 feet tall. When retracted, "The Shell" will cover the fixed building, and in warm weather, promoters can project movies onto the shell's eastern wall or hold concerts in the plaza. In bad weather, the shell can be extended over the plaza to create a cavernous temperature-controlled hall that holds 3,000 people.

DS+R has a history of designing buildings that transform space, said Robert Katchur, an associate at the firm and project leader for The Shed. “But we’ve never done anything on this scale,” he said, adding that up to 20 engineers had worked on the project at times. “This felt like a new opportunity.”

The main challenge in designing such a large structure that could move efficiently and quickly across a 113-foot span of steel tracks was making it as light as possible.

To control the weight, the team designed a lattice structure with a clear skin made from ethylene tetrafluoroethylene (ETFE). The plastic is about 100 times lighter than glass, so it doesn’t require as much steel for support. DS+R plans to cover the lattice with multiple layers of ETFE to trap air and provide insulation properties similar to those of double-paned windows. The structure was also designed to deflect the strong winds that can whip off the nearby Hudson River.

“The lattice serves as a structural expression that keeps the building light and maneuverable,” Katchur said. Still, by the time The Shed opens in spring 2019, the structure will weigh 4,040 tons, about as much as 100 fully loaded 18-wheeler trucks.

To maneuver such a massive structure, the team designed a system that works the same way as the gantry cranes used to unload shipping containers from cargo ships. Two rack-and-pinion drive systems will sit on the roof of the fixed structure. Six motors with a combined 180 horsepower—about as much as a compact car—will drive the system.

The shell itself rests on six six-foot steel wheels attached to integral bearing shafts, which provide far less resistance as the wheels roll than a plain bearing system, Katchur said. At a quarter mile an hour, it will take about five minutes for the shell to expand fully.

“We worked very hard to make the structure expressive and beautiful,” Katchur said. “But a lot of the design was driven by function and engineering.”

The lattice serves as a structural expression that keeps the building light and maneuverable.Robert Katchur, project leader, The Shed