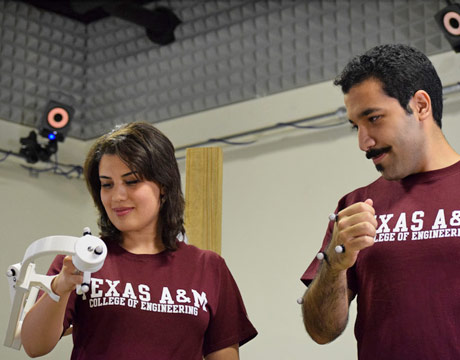 An Exoskeleton Assists the Road to Recovery

It’s easy to take for granted how amazing the human body is. And the complexity of simple motion may be the thing we take most for granted. So what if you were to wake up one day and it was an effort just to make your limbs move? Many daily movements would quickly become impossible tasks. This is partly why so many find that coming back from a stroke can be a very physically and emotionally draining experience.

The stroke patient has been through a devastating event and now may have to relearn basic movements from scratch.

A new stroke device created at Texas A&M University has the goal of helping to shorten the leaning curve, attempting to help victims relearn tasks such as combing their hair and putting on their coat more quickly. These are things many people take for granted but for stroke victims, these are the milestones on the way to recovery.

Says Rana Soltani-Zarrin, a Ph.D. student in the department of mechanical engineering at the school:“I have long been interested in the effects of stroke on society and how it affects other people’s lives. Robotics is another area I’ve been passionate about. Robotics can offer a tremendous number of benefits to society and, in my opinion, can make a human’s life even more complete.”

In speaking with therapists, they mentioned ergonomics and wanting to limit the time learning how to use this device as being at the top of their list, she says.

Using this feedback, a lightweight, compact exoskeleton that is configured to the upper limbs of the body is developed. “The device we have built has nine degrees of freedom, some are actuated, some are passive, and there are five degrees of freedom in the shoulder to address the ergonomic aspects,” she says.

The patient can grab a gripper and it goes from the hand to the shoulder. “It has different points of connection to the body,” she says.

The team also wanted to address the functional recovery of patients. “We want it like what occupational therapists do during training, trying to make our device as intelligent as we can,” she says. “Instead of forcing the patient to do something, it’s being activated by the intention of the patient. In the current format, it is designed to be used in clinics and hospitals by stroke patients but we have the goal that the next generations of the device will be used in their homes.”

They are also working with virtual reality, developing a training environment that includes engaging patients in games. “When you’re fully focusing on a game, there’s no telling what you can do,” she says.

For Soltani-Zarrin, she hopes that in time, this device will give comfort to those having to start over, sometimes a seemingly impossible task in many ways. “Accepting that a stroke has happened and what can be a long road to recovery can be very scary,” she says. “You hear about a stroke and, then it happens to you or someone you know. You need hope at a time like that. You can be comforted by a plan.” Soltani-Zarrin and Amin Zeiaee are the two PhD students working on this project at the Laboratory for Control, Robotics and Automation under the supervision of Dr. Reza Langari, the lead principal investigator of this research project.

Instead of forcing the patient to do something, it’s being activated by the intention of the patient.Rana Soltani-Zarrin, Texas A&M