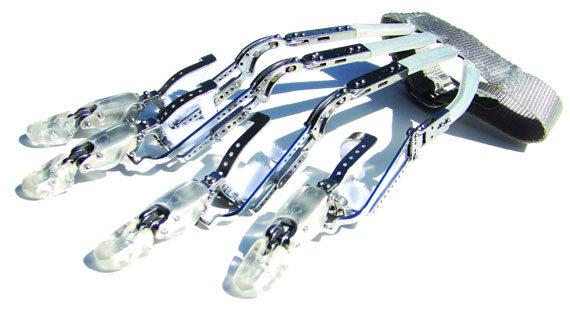 In a former life, Dan Didrick fabricated cosmetic fingers. The key word in that phrase is cosmetic.

"The fingers were only a silicon cap that doesn't bend," Didrick said. "We call them Sunday fingers because you wear them to church or dinner and then throw them in a drawer for the week."

Bedeviled by the cosmetic fingers' shortcomings, he invented X-Finger, surgical steel fingers that move, flex, and grasp, just like the wearer's original fingers.

"You can move them as quickly as you can move your prior finger; plus because it's common to flex your finger from open to closed and the X Finger follows motion of a residual finger, there's no learning curve," Didrick said. "A patient can use the device right away after putting it on. They could immediately catch a tossed ball that they see from the corner of their eye."

Along the 10-year path since his first prototype, Didrick patented the device–which uses no electronics—himself, sought and received coverage from all major medical insurers for the fingers, and taught himself computer-aided design (CAD). That last bit, he said, was the easiest.

A huge proportion of nonfatal accidental amputations involve fingers. The U.S. Bureau of Labor Statistics estimates that finger losses account for about 94% of job-related amputations.

So Didrick–who got his start in prosthethics as a child, by using materials from his father's dental office to make movie-quality monster masks–put his skills to use fabricating prosthetic fingers.

But his world, and his job, changed when he met a man who had lost several fingers in an accident and who was deaf. The loss of the fingers made it impossible to communicate in sign language.

"I started by actually carving components out of wood and assembling them into reciprocating series of components that, through leverages, force the mechanics in the shape of a finger to move from a straight to a bent position; from straight to a fist," Didrick said.

"So I came up with the assembly, but I was just carving them out of wood," Didrick said. "Then I started seeking out design engineers. That's when I realized it can cost tens of thousands of dollars to have a design engineer create an assembly of this nature."

Though he had majored in business in college, Didrick rose to this first challenge as he would rise to many others while launching X-Finger. He simply bought a CAD package–SolidWorks, from the company in Concord, MA–and quickly ran through the tutorial.

"Then I just started designing the components," he said. "It only took about two weeks to get the first design. I shipped those to a manufacturer and they replicated them using an EDM machine and sent back components."

Because all amputation cases are different, Didrick went on to develop what he called an erector set of parts that could be assembled into more than 500 different configurations. That number is likely much higher than 500, but "once I got that high, I became confused counting them," he said.

The device is composed of stainless steel, with a plastic cap that sits on the tip of the finger and another bit of plastic that sits at the flange. This is covered with a thermoplastic cosmetic skin that is soft and resists tearing. Think of what an artificial fishing worm feels like and how it can stretch.

"We actually contacted a company that was doing a job for the military, and they'd formulated thermoplastic to the same durometer reading as human skin; so it's almost eerie to touch it, in that it feels like skin," Didrick said.

Each finger contains 23 moving parts, though depending on the complexity of the case–such as whether the wearer retains a residual finger or not–it could contain more. For those without residual fingers, a wire runs into the webbing between the fingers to receive open and flex impulses. The device is attached to the wrist and fitted over the hand and the residual fingers.

"It was really challenging replacing the ring and middle finger. The joint that controls those residual fingers is in your hand," Didrick said. "But in this case it needs a probe that goes down into the webbing between the fingers to be controlled by that joint.

For those who have lost four fingers, the device allows the movement of the palm to control all the artificial fingers.

He bought a book called Patent It Yourself by David Pressman (1979 McGraw-Hill and since updated) and spent a year writing his own patent.

Once the device was patented, FDA representatives and some online help taught him how to write a 513(d) document necessary for device evaluation. Didrick sent his evaluation to the agency and soon received a positive response. X-Fingers (the plural, used when the device contains more than one finger) had been registered with the FDA.

The next step was receiving insurance approval for the fingers. After he won approval from the FDA, he went on to get approval from all major insurance companies, which now cover X-Fingers.

"From there, the device began taking off. The need was great," Didrick said. "Many amputees had been awaiting something like this."

What's little realized, he said, is how many children lose fingers. The largest group of people who lose fingers outside the workplace are children under five, who undergo finger amputation due to accidents like slamming them in a car door.

He also has learned that one out of 200 people will lose one or more fingers within their lifetime. That statistic takes into account people living all over the world.

"It's not only machinists who lose fingers," Didrick said.

Because his device is powered by the body, literally the wearer is flexing and bending his hand.

You can see a video demonstration of the X-Finger here.

Many of Didrick's customers pay a deposit in advance, which helps finance the four-employee company and it's continued innovations.

What's New and Next?

The U.S. Department of Defense asked him to design an artificial thumb, which he has also done. It's not surprisingly called the X-Thumb.

He's now at work on a thin glove that would enable those with paralyzed hands who retain some mobility in the wrist to use that mobility to control their hands.

Didrick is also trying to help children whose insurance companies deny them coverage because they grow out of their prosthetics too fast. The costs of producing children’s X-Fingers are high because of the variation in injuries and finger dimensions in smaller fingers and hands. He’s recently established the nonprofit 501(c)(3) organization, World Hand Foundation, to cover costs to provide X-Fingers for those who cannot afford to pay for them.

"If we needed the funds to hire a professional design team we'd never be able to do this," Didrick said.

You can move them as quickly as you can move your prior finger; plus because...the X-Finger follows the motion of a residual finger, there's no learning curve.Dan Didrick, X-Fingers Inventor