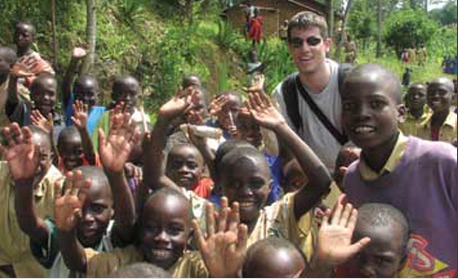 ASME student member Keir Hart of the University of Colorado poses with some youngsters in Muramba, Rwanda, where he worked on the village's water supply system.

Engineers Without Borders: The Rwanda Project

Keir Hart, an ASME student member, vividly remembers that night when he stepped off the plane into the darkness of Rwanda. Six months of planning as a participant in Colorado University ’s Engineering for Developing Communities had brought him and his group to the village of Muramba to examine a failed water system.

Hart, a mechanical engineering student at CU, joined project coordinator Evan Thomas, Laura Richards and Amadei on this project, to work on a deteriorating water system that supplied a few thousand people.

The village, still plagued by the aftereffects of a decade-old genocide, suffers from widespread starvation and disease. Poor water conditions cause frequent illness among residents. Inadequate soil conditions and a severe drought have made barren farm fields a devastating blow to the agriculture-dependent village.

“Women and children would spend hours everyday carrying water from broken fixtures,” Hart said. “Unfortunately, we could only install simple repairs. We were not equipped or funded well enough to fix the entire system, merely to analyze what was there.”

Help on the Way

The group ended up installing three solar-powered lighting systems, a drip-irrigation system for farming, and handed out a few hundred soccer balls to kids. For engineers like Hart, the trip was about more than just fixing a village’s water and energy problems.

“I learned a lot about Rwanda, engineering, and especially myself--as all good traveling tends to do, but I think that the most important memory I took away was the look on the peoples' faces we were helping,” Hart said. “I earned a renewed faith in what I was doing. With regular classes you look at books and your equations and hope for a right answer. When you are involved in a team like EWB-Rwanda, you still hope that you are correct, but you get to see the consequences.”

He said the best experience of all was seeing the faces of the kids light up. “I will never forget my experiences there and I sincerely hope that I get to go back,” he said.

EWB–USA projects involve the design and construction of water, wastewater, sanitation, energy, and shelter systems. These projects are initiated by, and completed with, contributions from the host community, which is trained to operate the systems without external assistance. The projects are conducted by groups of students under the supervision of faculty and professional engineers from partnering engineering firms

The CU-Boulder Outreach Committee, the Engineering Excellence Fund in the College of Engineering and Applied Science, along with private donations, sponsored the Rwanda project.

For more information on EWB, and how you can participate as an ASME member, go to http://www.asme.org/Communities/Students/Undergrad/Engineers_Borders_2.cfm.

The group ended up installing three solar-powered lighting systems, a drip-irrigation system for farming, and handed out a few hundred soccer balls to kids.