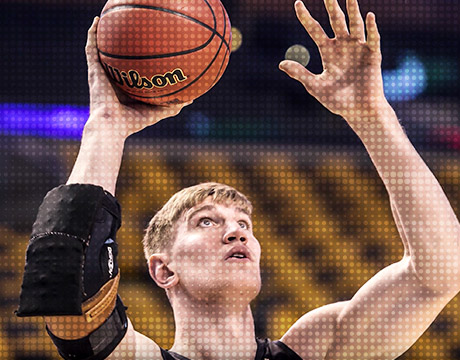 At Purdue University this March, the pressure was on as a major NCAA basketball game hung in the balance. With time a factor and the clock ticking, strategy and teamwork had to come together for the win.

However, the team members in this case were not basketball players but engineers.

When 7-foot-2-inch starting center Isaac Haas broke his elbow in the second round of this year’s NCAA tournament, it was thought that the tournament was all but over for the Boilermakers and its star player. However, a group of mechanical engineering students at the university went to work, aiming to create a brace that would allow Haas to play in the next game and keep the university’s national title hopes alive.

“It was known that Isaac Haas had broken his elbow and I thought that was it [for his season]. It didn’t occur to me that he would try to play,” says Eric Nauman, professor of mechanical engineering and biomedical engineering at Purdue.  “Then, on a Sunday night, administrators sent an e-mail out asking if we could make a brace for a man as big as that.”

They put students on alert Sunday night and then Monday morning the athletic trainers contacted us and we were out to see what a brace could do.Prof. Eric Nauman, Purdue University 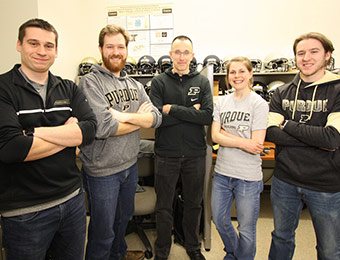 Prof. Eric Nauman with his team of engineering students who worked on a solution for the brace. Image: Purdue University

“We” would end up being Nauman and his group of mechanical engineering students.

“We had done a lot of work with assistive equipment related to head injuries and working on helmets, so we had already learned a lot about composites and rapid prototyping,” he says. “They put students on alert Sunday night and then Monday morning the athletic trainers contacted us and we were out to see what a brace could do.”

Just for You: Read more about the latest in manufacturing and design at ASME.org.

One critical roadblock to the project was that the NCAA needed to approve the brace for Haas, so the team needed a quick turnaround time to create something that might pass inspection. Their first design failed.

“The brace that wasn’t approved was a state of the art elbow brace and it had really good metal and composite components meant to stabilize the arm, but there was the thought that it possibly could hurt another player,” Nauman says. “We needed to come up with what something that would stabilize, prevent lock-out of the elbow, reduce the pain somewhat if he fell again, and have enough padding to avoid injuring the elbow further.”

From their previous work, they had patented polymer materials on which they could base their design, along with composite work. One team member was even a student who did leatherworking in his spare time and who could make straps to prevent the elbow from locking out.

“For the brace we created [and that was approved], there is a sleeve where we stitched the leather,” he says. “The leather straps come down and are mounted on the bicep and they stretch down to some other straps that are connected to the forearm. That holds it together and prevents it from locking out. Our new padding material was on the back end over his elbow so if he fell it wouldn’t hurt nearly as much through absorbing as much energy as possible.

“On the sides of the elbow is where we had these nicely tuned composites—where they were flexible side-to-side. This way, if someone ran into them they wouldn’t get hurt but it was also rigid up and down so they would provide some stability.”

Creating several prototypes in the short timeframe, team members worked round the clock, some not sleeping at all, for a total of 34 hours.

“We gave [the NCAA] all the parts and showed them three or four different configurations,” Nauman says. “The team was playing in Boston, where there was a storm, and the NCAA didn’t get to look at it until later in the week.”

The ruling? A win. “They approved it,” he says. “We felt like meeting NCAA criteria was a huge win for us, enabling Isaac to practice and test if he could go. I love how the students came together.”

The excitement grew as the game drew near. While ultimately the verdict was that the injury was just too much for Haas to play, the brace made at least made it a possibility for the team’s center. And now the team is building on their work to see if they can turn it into a device that could be used for rehabilitation.

“Everybody would have liked to have seen him in the game,” Nauman says. “But he gave it his best. And those students who worked on the brace can feel they gave it their best, too.”