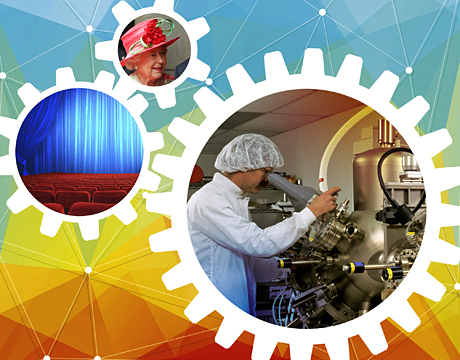 It’s October and that means Nobel Prize season, when the public spotlight briefly shines on a newly anointed class of laureates in medicine, physics, and chemistry. From the pre-award projections of winners and losers to the dramatic flourish of the surprise announcements, the prizes mean priceless positive press for the societal impacts of science. But for engineers – who typically create the very tools behind the Nobel-winning discoveries – it’s business as usual.

Perhaps that’s about to change. Engineers now have an unlikely friend in one of the highest, most visible places on the world media stage: The Queen of England. She has taken note of engineering’s lack of Nobel-level recognition, and she is not amused.

As a 60-year eyewitness to technology’s transformation of modern life, the monarch has thrown her royal support behind a new U.K.-based prize that could become engineering’s answer to the Nobel. The Queen Elizabeth (QE) Prize for engineering is her tip of the crown to an often-misunderstood profession that touches everything in our lives. The size of the prize – £1 million ($1.6 million USD) – is a down payment on the valuable worldwide awareness the award generates.

The QEPrize has a U.K. address but a global footprint. Underscoring that point, the inaugural prize celebrated the most global of all technical achievements – the internet. The inaugural QE Prize went to Louis Pouzin, Robert Kahn, and Vinton Cerf for their work on the internet’s fundamental architecture; Tim Berners-Lee for developing the World Wide Web; and Marc Andreesen for his role in authoring the Mosaic Web browser. The Royal Academy of Engineering, the prize’s London-based administrative body, announced the winners in March 2013, and a formal ceremony officiated by the Queen herself took place in June. The nomination cycle for next year opens in early 2014.

One of the main advocates behind the prize was Oliver Letwin, MP, Minister of State at England’s Cabinet Office. He led the effort to create an independent charitable trust to manage a sustaining endowment for the prize, funded with donations from BAE Systems, BG Group, BP, GlaxoSmithKline, Jaguar Land Rover, National Grid, Shell, Siemens, Sony, Tata Consultancy Services, Tata Steel, and Toshiba.

The ground rules for the QEPrize are straightforward. Anyone can nominate from one to three other living persons who are “personally and indisputably responsible for a ground-breaking innovation” of global benefit (this year’s five-way prize split was a special exception).

Judges representing academia and private industry from six countries and a range of engineering disciplines will evaluate candidates on their individual contributions to the nominated achievement, the global benefit of this work on humanity, and its significance as an engineering innovation. This year’s inaugural judging process took about six months from the nomination deadline to announcement day.

The Why’s Behind the Prize

It’s not entirely accurate to say that the Nobels give engineering the total cold shoulder. Historically, innovations such as the radio, the transistor, and opto-electronic devices such as the CCD and fiber-optics have earned laurels for their inventors. This year, all three science-focused prizes had a strong technological flavor to them, recognizing feats made possible only through machinery: machines that model and predict chemical processes; machines that reveal the origin of mass; machine-like biological processes that regulate communication between cells. Yet these prizes generally go to the physicists, chemists, and biologists who use the tools, not those who create them.

Beyond the aura of the Nobel, there’s no lack of big-ticket awards in the science and technology professions. Almost every major field has its own high honor informally regarded as its Nobel equivalent. Medicine has its Laskers. Architecture has its Pritzkers. Computer science has its Turings. There are highly respected prizes in many engineering disciplines. The QEPrize is an attempt to bridge the gap between a top professional honor and an international celebration of human achievement in the broadest sense.

“It is important for our profession to publicly honor engineering achievements that are having tangible, broad impacts on humanity and the needs of society,” said C.D. Mote, Jr., president of the National Academy of Engineering. “The Queen Elizabeth Prize for Engineering – and I’m glad those last two words were added to the title – is meant to recognize individuals, but is rightly even more focused on highlighting ‘engineering innovations that have demonstrated impact on a significant fraction of the world’s humanity’.”

Based on her official statements, Her Majesty agrees. “Over the past 60 years I have had the privilege of seeing how engineering developments can make a profound impact on people’s lives. I am delighted to lend my support to this prize and I hope that it inspires many more people across the globe to develop life-changing engineering creations in the years to come.”

Whether or not the QEPrize’s royal pedigree and regal prize purse bring Nobel-like buzz and ballyhoo to the engineering world, technology advocates say it will still be a royal gain.

For Further Discussion
Over the past 60 years, I have had the privilege of seeing how engineering developments can make a profound impact on people’s lives. I am delighted to lend my support to this prize.Queen Elizabeth II