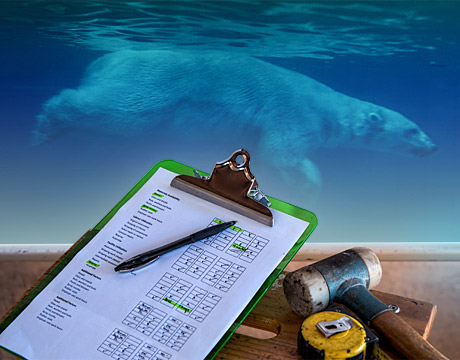 Engineering with the Animals

The zoo provides endless entertainment for children and adults alike, and has become a common diversion in the US and around the globe. However, few know how much engineering goes into these facilities. Both Len Lundquist and Lewis Anderson are well aware of what goes into a successful zoo, having worked on their share of zoo projects with LKPB Engineers, Inc.

In fact, one institution they worked with quite closely was the Como Zoo, in St. Paul, Minnesota.

A big aspect of that project was working with the polar bears. “It [the habitat] was a salt-based system, so we had the challenges to work with the water filtration system. There were the challenges with salt and corrosion and, with polar bears, we had to work around issues relating to cold weather,” Anderson says. “This was a year-round exhibit, so piping systems and heating systems have to be able to function and pass through areas that might be subject to minus 40 [Farenheit].”

But there was also off-exhibit workthat had “a den for a female polar bear to go ahead and have a cub,” Lundquist explains. That required a focus on the air-handling units to maintain a temperature of around 60 degrees. “The air-handling unit is susceptible to very cold temperatures inside the unit, so we then had to specify a complete thermal grade air handling. [In warm weather] we didn’t want to transfer that cold air atmosphere out to the exterior,” Lundquist says. “Because the temperatures in Minnesota will get to 92 degrees with high humidity and you avoid condensation that way.”

The polar bears in the off-exhibit area are sensitive to sound and they make sure if they do have rooftop air-handling systems that ventilate the area that they have sound and vibration control. “We have emergency generator backup and it’s about 100 feet away from the building so they don’t upset the polar bear with regard to sound and noise,” Lundquist says.

But there’s a quarantine area to content with, where they take mammals when they are sick or under care of a veterinarian. “For the HVAC system, you have to create the negative pressures within the holding area and the filtration is better,” Lundquist says. “It’s more severe or a higher percentage of filtration, like a hospital isolation room.”

There are indoor exhibit areas that need dehumidification to help with the moisture, says Lundquist. “With the air-handling systems or ventilation systems, you have one for the people who are visiting the zoo and one for the off-exhibit area where the dens are because you have these odors. You don’t want to transfer them from back in the house [to visitors]. In winter time, for the viewing area, we have the ability to bring in dry, cooler, outside air and that will dehumidify it.”

Anderson says they also built the system to recirculate. For example, fiberglass pumps are used against corrosion. After all, you don’t want salt in the city sewer and want to retain as much of it as you can from a pollution standpoint and economic standpoint. “There’s a whole intricate system of filtration and backwashing to recover as much saltwater as possible and put it back into the exhibit,” Anderson says.

For Further Discussion
With the air-handling systems or ventilation systems, you have one for the people who are visiting the zoo and one for the off-exhibit area where the dens are.”Len Lundquist, LKPB Engineers, Inc.