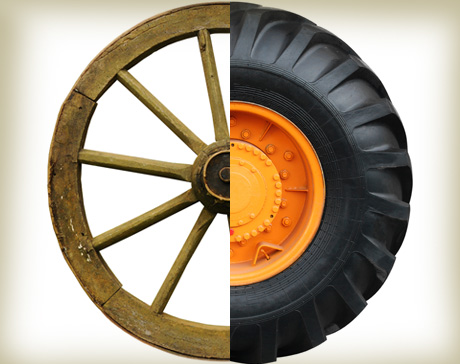 Engineering Then and Now

Living in an age of robotic armor, autonomous farm tractors, and nuclear clocks that are accurate for over 100 million years, it is easy to think that we live in the most technologically advanced age in human history. It can seem that almost any task, any activity can be accomplished with the mere push of a button or the flip of a switch. However, as early medieval scholar Dr. Patricia Becker of San Jose State University will tell you, it wasn't always so. In fact, change the "20" in 2012 to a "9," a mere fraction of a blip in the earth's history — and you are looking at a world and a human society so different from our modern age as to be virtually unrecognizable.

In the realm of agriculture, Becker turns to 20th century pop culture to give people an idea of what the backbreaking daily work of farming in the early middle ages (c. 400-1000) was like, even after the revolutionary invention of the heavy plough in Northern Europe in the fifth century: "If you think of Fiddler on the Roof, at one point his [protagonist Tevye's] horse goes lame and he puts this yoke on and he ends up pulling the cart by himself. So that's very much how they would pull the [heavy] plough. They would have to drag it themselves."

The height of technology in this era was little more than a sharpened stick yoked to a team of oxen — if you happened to be wealthy enough to own such early middle age status symbols. If not, it was yoked to you, the farmer. Needless to say, agriculture has come a long way since the days of dragging heavy sticks through mud. Today's autonomous, driverless tractors have changed agriculture to the point where a person is no longer needed at all. Utilizing advanced software, sensors, radar, and GPS, today's farmer has merely to set the tractor's course and let the machine do the work. Once that's done, there isn't even the need for human oversight, according to Jeremy Brown, president of Jaybridge Robotics, Cambridge, MA, who worked with John Deere to design their autonomous system: "There's nobody with their hands on a joystick."

The very concept of keeping time would have been foreign to the average peasant in the early middle ages. The sun rose, reached the middle of the sky, and then set. However, if the need for a precise measure of time did come up, a sundial or timed water clock could be used if you were very wealthy. If not, an unreliable hourglass, which could track short durations of time, might suffice. Otherwise, when asked if there was any form of personal timekeeping in this era, Becker replies, "No. Rich people I'm sure had, in their homes, sundials or things like that." But it wasn't until about the 14th century that a universal notion of the time of day came about. "[At this time] Big community clocks came about and they were installed in towers, and one of the earliest was installed in Milan in 1309. These clocks were very significant because they let people actually have universal time."

However, since no two towns could agree on what time it was and worked from their own preferred "zero hour," you had the makings of a great deal of middle ages confusion.

By contrast, Greenwich mean time has long since been agreed upon, and the National Physics Lab in Middlesex, UK, earlier this year created a cesium fountain clock, dubbed "NPL Cs F2" that will lose its first second in approximately 138 million years, which is basically the time it took for the dinosaurs of the Cretaceous period to evolve, go extinct, and for humans to appear. According to Gizmodo.com, the clock "tosses cesium-33 atoms through a tunable microwave cavity and measures the number of oscillations as the cesium atoms transition between two energy levels." A far cry from pouring sand through a molded piece of glass — or simply guessing the time by where the sun was.

As anyone who has seen or read Beowulf, The Anglo-Saxon Chronicles, or later, Le Morte D'Arthur, can attest, people in early medieval Europe were very good at fighting and killing one another. And they only got better at it as the medieval age dawned and gunpowder arrived on the scene from Asia. As Becker puts it: "We're very good at finding ways to blow ourselves up." So perhaps it is no surprise that of all the technologies discussed here, it is military technologies that hold up the best through time.

If you were a warrior in the early middle ages and happened to have a little in the way of money, you could buy a very nice suit of metal chain mail, which was popular in Europe, Asia, and India at this time. Made of countless interlocking rings of metal, even today it is very effective at slowing the blade of a knife or dulling the impact of a sword stroke. Later, when suits of plate mail made their way onto battlefields in Europe and the age of knights was born, a mounted warrior in one of these suits was virtually indestructible.

However, today's battlefield technology has advanced to the point where science fiction and comic book fantasy are becoming — and in many cases already are — reality. Take Raytheon's robotic suit, already dubbed the "Iron Man" suit in many corners. It enables a soldier to lift 200 pounds several hundred times with ease, put a man or woman on his or her back, and yet perform precision movements like climbing stairs and kicking a soccer ball.

As to whether some future age looks back on this one and marvels at how primitive life in the early 21st century was, there is no way to tell. Like those in the early middle ages, most today would have a difficult time fathoming how this advanced age could be considered quaint or backward. However, Becker believes that whatever technological advances the future holds, they will be nothing if not unpredictable. "Once technology is there, people are going to use it in ways it wasn't originally intended," she says."That's the whole history of technology."

Once technology is there, people are going to use it in ways it wasn’t originally intended. That’s the whole history of technology.Dr. Patricia Becker, San Jose State University