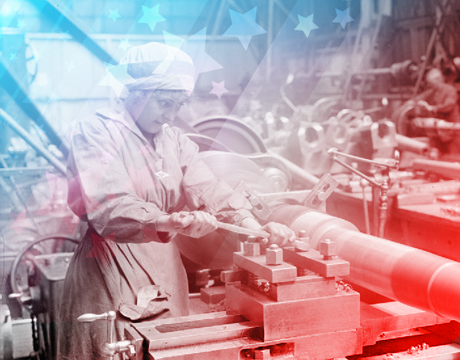 Over the course of the past 120 Labor Days, the original meaning of the federal holiday has taken a back seat to the opportunity for one last summer blowout. But someone had to fight for our right to party. Along with crusading journalists, social reformers, suffragettes, and labor advocates, mechanical engineers of the late 19th and early 20th centuries were the instruments of sweeping change in American life, both on and off the job.

Engineering’s role in the drama of labor reform is complicated. On one hand, their machines of mass production threatened craftsmen and laborers as the engines of unemployment. On the other hand, engineering knowledge helped enhance workers’ quality of life by fueling equipment manufacturing standards and safety codes. And as workers themselves, engineers of the machine age shared the same desire for a collective voice at the bargaining table.

Before labor reform, American industry was a much more dangerous place, where the new machines of mass production could instantly turn into haywire tools of mass destruction and loss of life. Children were a mainstay of the workforce. As steam power transformed the landscape of the mechanized age, a preponderance of little-noticed explosions and fires linked to steam boilers across the country finally gained national attention with the Grover Shoe Factory tragedy of 1905. After the Brockton, MA, boiler explosion killed 58 workers, injured 117 more, and leveled the factory, government agencies and professional organizations such as ASME came together to develop standards to protect workers and prevent catastrophic loss to businesses. ASME’s venerable Boiler and Pressure Vessel Code (B&PVC) was developed in the aftermath and first published in 1915.

In 1911, a fire at lower Manhattan’s Triangle Shirtwaist Factory killed 146 garment workers in a blaze of uncertain origin. Although a stray match or cigarette got the official blame, other reports of the time implicated a malfunction in the factory’s sewing machinery. Whatever the cause, many workers perished because the factory owners had locked the stairwell doors as a precaution against worker theft and unauthorized work breaks. With vivid press reports of young immigrant women leaping from upper stories to their deaths to escape the flames, national attention fixed on workplace safety and the need for regulation. The American Society of Safety Engineers organized soon after, and continues to set engineering standards to minimize worker mishaps.

“Many workmen in trades have fought and borne awful sacrifices in the fight against the introduction of a new machine or a new tool,” said Samuel Gompers, founder of the American Federation of Labor. “Some have even gone so far as to violently destroy the machine, but it did not destroy the idea.”

Mankind’s struggle against the dehumanizing effects of mechanization is one of the central conflicts of our time. From England’s loom-smashing Luddites, to the American steel-driving folk hero John Henry, to radical 20th century acts of industrial sabotage, a segment of the industrial workforce has put its rage against the machine into action.

When the demand for labor drops after the introduction of a new machine, it’s called technological unemployment. The fear of losing one’s livelihood to a newfangled device has driven workers to violence, sabotage, and intentional withdrawal of productivity. The adjustment to mechanization was especially challenging for skilled craftspeople who had learned the ins and outs of their profession over years of apprenticeship.

Engineer Frederick W. Taylor of Bethlehem Steel believed the opposite model was better for industrial productivity. His method broke down complex manufacturing processes into the smallest possible steps and assigned each worker the fewest possible tasks, so factory production could accelerate and the need for skilled labor would drop significantly. His Scientific Management theories, first presented at a 1903 ASME conference, were an overt effort to eliminate skilled workers from the factory payroll. Predictably, the approach caught on like wildfire, and skilled workers represented by trade unions of the AFL were suddenly, in Gompers’ words, “thrown into the army of the unskilled.”

Even as the old-time craft unions resisted change, a new element of mass production workers seeking union representation arose within the labor movement. Industrial unions arose among machine operators and other new semi-skilled or unskilled workers willing to make peace with new technologies and the changing division of labor. By 1935, a Committee for Industrial Organizations – today’s CIO – formed within the AFL in response.

On the other end of spectrum, highly educated scientists and engineers in government and private sector organizations sought strength in numbers. The International Federation of Professional and Technical Engineers was chartered by the American Federation of Labor in 1918 to represent a national coalition of shipyard draftsmen and architects. The International Association of Machinists and Aerospace Workers, the Utility Workers Union of America, and other affiliate groups of the AFL-CIO’s Department for Professional Employees look after member interests, especially at the federal level, where key issues include the NASA budget, privatization of the Tennessee Valley Authority, military base shut-down, and immigration reform.

That uneasy power balance between organized labor, automation, and individual interests creates a curious tension around Labor Day, and engineers have been in the thick of it since the beginning.

For Further Discussion
Many workmen in trades have fought and borne awful sacrifices in the fight against the introduction of a new machine or a new tool.Samuel Gompers