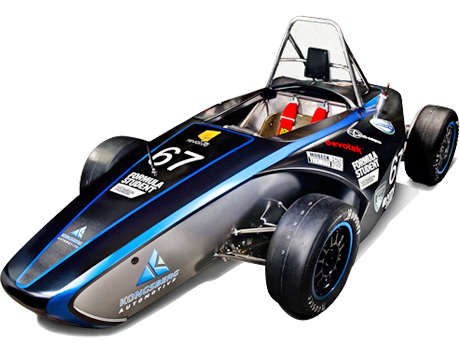 "It's definitely evolved over the years. You originally had the tube frame car but now the work on the engine, chassis, and structure has become very sophisticated." Though Daum says they can't race at top speeds for obvious safety reasons, these events still have the feel of high-level competition. Judges look at areas such as cost justification, while a panel plays the role of potential investors. "They're asking, 'Why did you do the suspension this way? What research did you do? Why this engine setup? What if we made this change?'" he says."A lot of things to answer." Other events include a measure of acceleration and a 22-kilometer endurance race.

A typical team forms when they start the fall semester, and the designing for that year's car can take four to five months, Daum says. "You may not be making your own tires or microchips but just about everything else is you," he says. "Welding all the tubes together, how you want it to be constructed to hold things together….For many students, it's their first chance to do anything like this. And some get very serious. Cornell actually won't add anything to their car unless they've tested it for a year." Daum says the size of the teams vary, usually ranging fromsix to forty. "Some have just had four but it's usually a struggle that way," he says.

But beyond competition is the chance for another kind of learning. "What isn't covered heavily in many engineering schools is how to manage products," Daum says. "You think of this as an engineering competition but it's even more a product management competition."

It's not all planning—sometimes it's quick thinking. Take the Rochester Institute of Technology, years ago. "When the car got to the line [for competition], it was spraying gas out of the injector," he recalls. "You're not allowed to run that way. They were the tenth car from the end and they asked if they could still run if they could change the injector before their turn. The team members found what they needed and ran to the engine hot area, handing tools and the parts, they somehow changed it in time. Not only did they run the event, they won it."

Undergrads, grads, and doctoral students are all allowed to compete, and it may just lead to another finish line.

"Many people who work in the auto industry are former competitors," he says. "Employers want to know how you solve problems and you have the answer many times through this experience. If you were on a good team, then you learned efficiency. It's also easier for the potential employer to relate to someone talking about their experience in a car competition than work they did with a professor on some widget drill."

Employers want to know how you solve problems and you have the answer many times through this experience. If you were on a good team, then you learned efficiency.Steve Daum, collegiate projects manager, SAE International