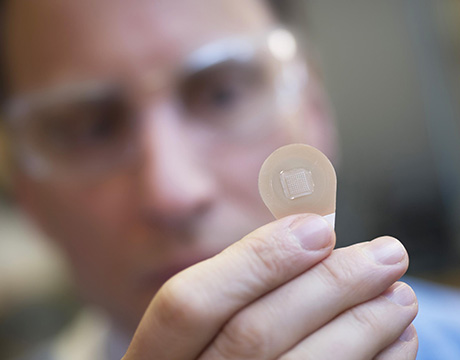 Like most engineers, Mark Prausnitz chose his profession because he likes to solve problems. Ever since his student days, he has been motivated by one kind of problem, one where he can make a major difference in people’s lives.

That motivation, spurred by his idea about a novel method for drug delivery, has driven him to find a way to make vaccines, drugs, and the like more affordable and accessible to many more people around the world, particularly in developing countries.

Today, Prausnitz, the Regents professor of chemical and biomolecular engineering at Georgia Institute of Technology and director of the university’s Center for Drug Design, Development and Delivery, believes within five years he will see his decades-long dream come to fruition. He and his Georgia Tech team and other collaborators have developed a new technology for drug delivery, a seemingly simple adhesive, bandage-like patch carrying a hundred or more dissolvable microscopic needles composed of a drug or vaccine that is absorbed through the skin.

That delivery system carrying influenza vaccine recently completed a human clinical trial with approximately 100 participants conducted by collaborator Emory University. The dime-sized patch is applied by pressing it painlessly into the skin at the wrist. The study found that the patches were just as effective in immunizing against influenza as a traditional application. The patches are more affordable than today’s syringe because they can be stored without refrigeration and self-administered and are easily disposed after use. The team is also working on microneedle patches for other vaccines, including for measles, rubella, and polio.

Prausnitz began work on microneedle drug delivery some 22 years ago, not long after he had earned a PhD from MIT and joined Georgia Tech. There, he teamed with Mark Allen, a professor and electrical engineer working on microfabrication for electronic devices, to begin adapting electronics industry technology to make microneedle structures.

Along the way, the team overcame a variety of engineering challenges. “The first challenge was in making them at all,” Prausnitz says. “Then in terms of advancing the technology from a scientific standpoint, a lot of it was step by step.”

The first microneedles were made of silicon, which the team quickly realized was not right for a medical device. “It’s a good semiconductor, but it’s brittle, and it’s expensive so we moved to other materials, first metals like stainless steel, then polymers that are biodegradable and water soluble,” Praunitz says.

One major challenge involved the biomechanics of the interrelationship between the microneedle patch and the skin. The needles are less than a millimeter long. If they aren’t designed and applied right, pressing them onto the skin could deform the skin, making a little valley in it, and not actually puncture it, Prausnitz says. Thus, the microneedles need to be strong and sharp so that they puncture the skin with less force, deforming the skin less where the puncture occurs.

In order to avoid the use of an applicator, not desirable since a disposable could increase the cost and a reusable would need sterilization, the team opted for thumb-based insertion by optimizing the geometry of the microneedles and incorporating a device that makes a clicking sound to indicate that enough force has been applied. At first, instructions for application were “press hard,” but that meant different things to different people, Prausnitz says.

Fabrication also presented challenges. Unlike a hollow needle in a syringe, the microneedles are solid and composed of sucrose, with the influenza vaccine encapsulated within. When applied, they get wet from body fluids, the needles dissolve, and the vaccine is absorbed through the skin.

To ensure that the needles have that functionality, a sophisticated fabrication method is used to make a master structure in the shape of the device, and then an inverse mold is made. The solutions are cast onto the inverse mold and dried.

“Controlling the deposition onto the mold turns out to be quite important,” Prausnitz says. “In part because you want the solution to properly fill the mold and you’re talking hundreds of microns in the longest dimension and something like one micron in the smaller one.”

Additionally, encapsulated bioactive molecules don’t like to be dry so the team had to figure out how to formulate the solutions with just the right additives to make the microneedles strong enough not to bend or break as they puncture the skin. “Sucrose is a simple one,” Prausnitz says.

The next step is to conduct a larger clinical study and address some manufacturing issues.

“It’s a new manufacturing method and must be done at reasonable cost. We want patches made for mass influenza vaccination campaigns in developing countries,” Prausnitz says. “The question is, ‘Can you make 100 million at sufficiently low cost, reliably and robustly?’”

The answer right now is not yet. “But we think we have a way. It remains to be proven,” he says.

For Further Discussion
The question is can you make 100 million at sufficiently low cost, reliably and robustly.Prof. Mark Prausnitz, Georgia Tech