Engineering On The Fly

Engineering On The Fly 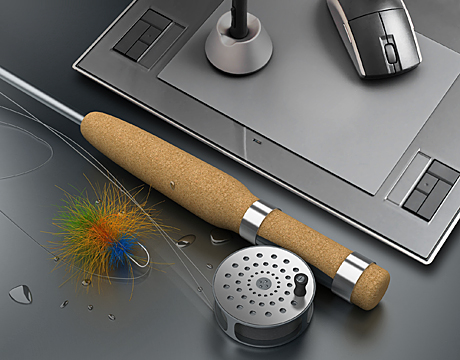 Do you think fishing is just a rod and a reel? Try telling that to the loyal community inhabiting the sport known as fly fishing.

“I always say it’s a combination of art and science,” says Kurt Van Wyck, who received his mechanical engineering degree from the University of Dayton, and is presently vice president of product development for Sage Manufacturing , a company that manufactures fly fishing equipment.

“On the science side, a lot of engineering goes into testing material and manufacturing. Looking at alignment on down, but also people expressing themselves through the design,” says Van Wyck. “We use SolidWorks for reels, do so much cycle testing. It’s much more than just creating a style.”

Van Wyck says delivering proper equipment comes down to appreciating the different goals of the sports. “For reels, it’s much different if catching a 150-pound fish than if going after a small trout,” he says. “It’s a lot of use of drag depending on the specific fisheries. Many companies just have fly reels tightening till the level you want but, with us, it’s a one-revolution knob and takes it through the drag to what’s appropriate for the fishing need. You want drag material that doesn’t compress and is repeatable. You also want your engineering reel to handle the heat and dissipate the heat that’s in it and not damage the drag materials and surfaces.” The majority of reels offered by Sage are made out of Aluminum 6061.

For the 180 different kinds of rods the company offers, thickness runs the gamut. “We can actually have the tip of it with only two layers of material on it—very delicate—and we’re constantly testing if the structure can handle the stress,” he says. “There’s a great deal of engineering that goes into these thin-wall tubes for flexing, where they can go as much as 180 degrees without having them fail.” As far as the rod material, Van Wyck says the prep material looks like rolls of fabric but it’s rolled on paper steel and compressed and baked in the oven. Then the epoxy is put over the carbon fiber.”

There are also requirements for impact. “If you’re casting and hit the rod with the fly, you have impact happening to it and want to create structures that minimize damage to the rod,” he says. “We do structure analysis, bending and breaking parts to evaluate products from suppliers but also the way we put them together.” The most popular rod for Sage Manufacturing is a 590-4 for a trout application, he says.

In the two years he’s been with the company, Van Wyck has been truly blown away by the romance of the sport. “It’s a passion sport—the level people go to is off the charts,” he says. “Some are competitive casters going for accuracy and distance, some fish to check out different species, and they’re a very knowledgeable group … You have to put out high level equipment because they’ll definitely know if you don’t.”

For Further Discussion
We use SolidWorks for reels, do so much cycle testing. It’s much more than just creating a style. Kurt Van Wyck, Sage Manufacturing