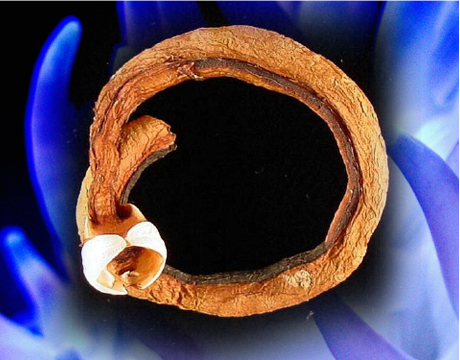 Shipworms are elongated clams or geoducks that survive on an all wood diet.

With a well-earned reputation for damaging wooden ships and poisoning scuba divers, ocean-dwelling mollusks have had a precarious relationship with human beings for centuries. But their public relations problems may soon be over if marine biologists and bioengineers have their way.

Researchers have found that this humble category of invertebrates – which includes some 85,000 different species of marine and freshwater clams, snails, squids, mussels, and octopods – actually harbors a secret that could help humans stay healthy and pain-free. Mollusks, as it turns out, have guts. And, more importantly, those guts contain unique micro-organisms that might save human lives.

Over millions of years of evolution, mollusks have co-existed with ancient forms of bacteria that reside harmlessly in their digestive tracts. In symbiotic return for their accommodations, the bacteria have learned to express agents that support the mollusk’s body functions and help it ward off disease. Studies have revealed compelling, drug-like molecular properties that could have potential as antibiotic or neurological treatments in humans.

“This line of research is absolutely critical considering the serious human health threat posed by antibiotic resistance,” says Dr. Margo Haygood, Ph.D., a professor of science and engineering at Oregon Health & Science University, Portland,and a member of the university’s multidisciplinary Institute of Environmental Health. “Bacteria that live in harmony with animals are promising sources of new infection-fighting drugs to replace our aging formulary of antibiotics.”

But mollusk-based medicines have potential beyond antibiotics, Haygood says. Recent breakthroughs have also shown therapeutic activity in the brain, which creates opportunity for powerful, non-narcotic pain control medicines of the future.

Haygood and her colleagues are leaders in this new scientific niche linking bioengineering with marine microbiology. She has recently contributed to two major breakthroughs involving two mollusk species that, ironically, are historically some of the most dangerous or destructive to humans: shipworms and cone snails.

First off, shipworms are not even worms. They are more like elongated clams or geoducks that are mostly unprotected by shells. But they do possess shells – tiny ones on their anterior ends, which they use with devastating effectiveness to bore deeply into their favorite food source, wood. These “termites of the sea” are best known for burrowing deeply into to wooden marine docks, piers and ship hulls, resulting in severe damage over time.

Haygood says scientists first wanted to know how shipworms are able to survive on an all-wood diet, considering that wood offers them no proteins or nitrogen. They learned that the bacteria present in the animal’s gut plays a crucial role in converting the wood fibers into an acceptable food source. In effect, the mollusk’s gut bacteria have evolved so that the animal can derive double benefit from wood: they can eat it, and they can live in the burrows they carve.

One form of shipworm gut bacteria was found to secrete a strong antibiotic, Haygood says, which creates great excitement among the community of scientists concerned that modern infectious organisms are developing resistance to drugs at a rate that is outpacing our discovery efforts.

“Antibiotics have helped humans battle infectious diseases for over 70 years. However, the dangerous organisms these medications were designed to protect us against have adapted due to widespread use. Without a new class of improved antibiotics, older medications are becoming less and less effective and we need to locate new antibiotics to keep these diseases at bay,” Haygood adds.

The Scoop on Cone Shells

Cone snails are carnivorous predators found in a vast array of sizes and with an infinite variety of colorful shell colors and patterns that make them highly collectible. They are also highly toxic – even to humans. They paralyze small fish or other mollusks with a sting from a barbed, hypodermic-like tooth extending from the mouth, then engulf and devour the prey. For a human, a jab from a small cone snail feel like a bee sting, but the bigger snails can pierce a wet suit and are toxic enough to kill.

Until recently scientists haven’t spent much time looking for potential cures in cone snails. For one thing, they are toxic – the larger ones can kill a human. For another thing, they have tough shells that can protect them from almost any predator. Scientists assumed that these strong protections would make it unlikely that the organism would have needed to develop additional chemical or bacterial defenses against danger, such as those used by the shipworm.

Not the case. Haygood worked with a team of researchers at the University of Utah and the University of the Philippines on a recently published study revealing that cone snails, too, have the intestinal bacteriological fortitude it takes to inspire new drugs.

She said the research demonstrated how bacteria carried by cone snails produce a neuroactive chemical that has great promise in the treatment of severe pain. For patients with conditions that cause chronic pain, the need for a non-narcotic, non-addictive palliative drug is urgent.

“Not only did we learn that mollusks with external shells, like the cone snail, really do have potential use in the search for new medications,” Haygood says, “we also learned an important and surprising new direction for such drugs in neurology.”