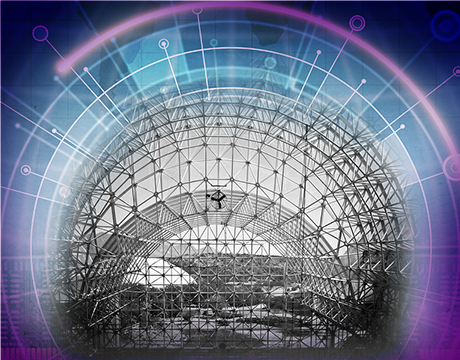 Climate change is a contentious political issue despite overall agreement within the scientific community that the subject is very real. The complex history and interaction of natural systems on such a large scale often requires scientists to devise computer models to predict interactions among a variety of natural processes. What’s been lacking is an actual physical model where scientists can produce physical documentation of changes in and interaction of Earth systems. Until now.

Scientists at the University of Arizona want to change the way nature is studied by refitting a portion of Biosphere 2, a sprawling glass-enclosed spaceframe structure with its own colorful history, into a unique laboratory where changes in large-scale Earth systems can be observed and meticulously documented. But it took some exacting engineering to shoehorn three large steel planting-tray structures that mimic hill slopes into the vaulted structure while meeting the strict tolerances required for scientific measurement. The project is called LEO: Landscape Evolution Observatory.

“We like to use the word ‘unique’ with this project,” says Dennis Mulligan, executive vice president with M3 Engineering and Technology, Tucson, AZ. M3 was brought on partly because of its experience in designing observatories and other scientific projects, he says. Because of the physical constraints, he likens the effort to building three ships within a bottle.

The “bottle” is a 5,000-square-meter vaulted spaceframe structure, one of the original Biosphere 2 biomes. Biosphere 2 was constructed in the 1980s in Oracle, in the desert outside of Tucson, as an ambitious privately funded experiment to help determine if humans might colonize other planets. It includes several spaceframes, each of which mimics a separate ecosystem such as a seashore, a rainforest, and a savannah.

In the 1990s, eight scientists, called “biospherians,” were locked in the complex for two years in an experiment to see if engineered Earth systems could support human life in a contained environment. The complex was highly engineered. The original designers built mechanical “lungs,” an airflow system that breathed to accommodate movement in the glazing and spaceframe generated by solar heat. The entire complex was sealed to prevent atmospheric intrusion.

The experiment was controversial, but the engineering proved itself over the two years. Since then, ownership changed hands twice before the University of Arizona acquired it in 2011. UA scientists felt they had acquired a facility like no other, where truly grand-scale experiments could be conducted on landscape-scale changes in Earth systems behavior.

LEO converts the agricultural biome, where biospherians grew their own food. UA scientists wanted to study how large-scale landscapes evolve from bare earth to a thriving ecosystem under controlled circumstances. The result is three identical, sloping 333-square-meter convergent landscapes—the steel planting-tray structures, each fitted with an irrigation system and a personnel transporter, a mobile steel structure that resembles a gantry crane that travels over the trays, giving scientists and technicians access to the trays without setting foot on them. Each tray has 2,800 sensors embedded at varying depths to monitor water and soil movement and other items.

But M3 first had to figure out how to design and build the structures in such a tight space. “One of the driving factors was the load-carrying capacity of the existing building,” says lead structural engineer Allan Ortega. That proved complicated because of a lack of original drawings. Steel was chosen for the trays because of limited weight that the concrete foundation could carry, he says.

Each steel tray is a 38-ft-wide by 100-foot-long steel box, open on the top and sloping 10%. The transverse slope varies along the length to form ridges and valley channels that simulate a hill slope. To form the slope, the tray is built with transverse U-shaped frame beams space one meter on center, resembling a ship’s hull. Those beams are attached to two deep longitudinal girders that connect to the substructure. The 10 steel columns of each tray are directly aligned over concrete columns of the basement structure, eliminating bending loads on the concrete floor beams.

Complicating design and construction was access that turned out to be severely limited. There was only one entrance in the space frame, measuring 10 by 12 feet, through which all material and equipment could pass. That prevented the contractor from using cranes to erect the structures, instead relying on forklifts and other lifting equipment. Workers had to build the trays individually, starting from the farthest location from the entrance and working back toward the opening. M3 drew on Building Information Modeling, or BIM, and other systems to identify conflicts and prevent field errors.

“It’s not possible to make a large opening in a space frame,” says Mulligan. “We didn’t know how to construct three hill slopes in a reasonably economic way.”

Ortega says the team used laser scanning to determine the exact measurement of the structure and within it, and then used those measurements to develop 3-D design documents. He relied on Revit for the interaction of mechanical and electrical systems, and Tekla to develop shop drawings.

The final challenge was selecting load cells needed to measure delicate changes within the structures. “It was one of the biggest, says Ortega. “It required a very stringent accuracy.” Biosphere scientists set a performance requirement to detect a change in weight equivalent to a layer of one centimeter of water over the tray.

The load cells were further complicated because the connection needed to support the tray at an angle. The resulting high axial loads in combination with the lateral load coming from the sloped tray, along with seismic requirements, narrowed the field of vendors. The engineers found one manufacturer, Honeywell, that could meet the requirement, but the lead times for delivery stretched to 10 months.

Each load cell was custom fabricated, and each tray required 10 cells. To protect them during construction while allowing work to continue, the contractor fitted the trays with dummy cells, and devised a custom jacking system to remove them and insert the live cells later.

Work wrapped earlier this year with completion of the third tray and delivery and spreading of a basaltic soil within the trays. The landscapes will be barren for three years as the soil builds and scientists start to address LEO’s “grand challenges”: How Earth’s landscapes change as climate changes; How water, carbon, and energy move through the landscape: How biological systems modify landscapes; and how terrestrial water sources alter with climate change.

Listen to a podcast with Allan Ortega.

We didn’t know how to construct three hill slopes in a reasonably economic way.Dennis Mulligan, M3 Engineering and Technology

Public Health is a Job for Engineers