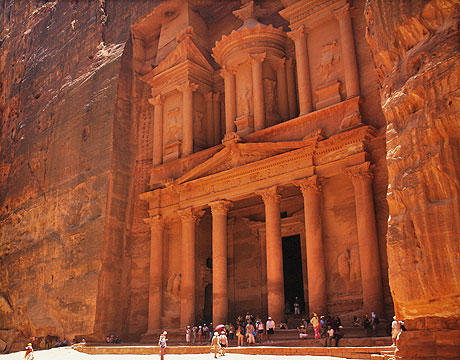 The Engineering Behind a World Wonder

Wonders of the World are usually so classified for a reason: They defy easy explanation. The Pyramids. The Hanging Gardens of Babylon. The Colossus of Rhodes. The average person simply cannot fathom how fellow humans, let alone ancient fellow humans lacking modern technology, were able to create such stunning monuments to the human spirit.

The rock city of Petra, and particularly “The Treasury,” building - or “Al Khazneh” as it was called for nearly two millennia before being discovered by the Western world in 1812 by Swiss explorer Johann Ludwig Burckhardt, who disguised himself as a Bedouin to gain access – is a young Wonder. Named to the “New Wonders of the World” list in 2007, it is known to most people as the scene of the climax of the hit movie, Indiana Jones and the Last Crusade, in which it is portrayed as the location of the legendary Holy Grail.

However, in reality, it was built possibly as early as the fifth century BCE by the Nabataeans, a culture of traders who established the city and its Greek-themed architecture as a sort of welcoming overture to their primary trading partners in the Mediterranean.

But as with all wonders, when studied closely, it turns out there is a great deal of engineering behind what the eye marvels at. “The question has been asked time and again: How did they do it?” says Dr. Glenn Corbett, Associate Director of the American Center of Oriental Research in Amman, Jordan. “What were the techniques they used to do it, particularly when you see the massive size when you’re standing at the foot of one of these buildings.”

It turns out that in a world where gas-powered machinery and high-tech cutting instruments were millennia away, it took some incredible ingenuity and problem-solving to get the job done.

“One of the things that we’ve discovered relatively recently is that it was determined that for these rock-cut facades, and not just Al Khazneh or The Treasury, all of these were not sculpted from the bottom up, but rather from the top down,” says Corbett. “They [the stonecutters] would identify presumably the surface in the mountain that they thought was ideal for the façade that they wanted to create, and presumably they did have engineers and architects who had pre-planned what they wanted these facades to look like.”

Once the rock was selected by the engineers of the day and the site decided upon, the construction itself could take place, which may be the most intriguing aspect of the Petra story.

“They would [then] climb to the necessary level, to identify where the top of the rock-cut monument would be, and gradually, with teams of stonemasons, would carve an initial ledge in the rock, and they would sort of shave away an initial, almost blank façade in the rock,” Corbett says. “That would become essentially the blank canvas from which they would work.” From there, the expert, detailed carving and shaping of the structures in the soft sandstone could begin, ledge by ledge down to the bottom, a painstaking job, particularly considering the tools of the day they had to work with.

“Mostly these would have been pickaxes, different types of chisels, and hand axes,” says Corbett, resulting in a construction time of at least three to four years for Al Khazneh in his estimation.

One aspect of the city that may surprise many modern observers was the builders’ focus on sustainability. While certainly not influenced by the concept in its 21st century sense, the builders were very concerned with reusing materials and with eliminating waste.

“The Nabataeans were actually very efficient in how they used all of this quarried stone. Much of the stone that was used to sculpt out Al Khazneh and other monuments was actually used throughout Petra in real buildings,” says Corbett. “So the massive, monumental blocks that they used to build the large temples and the large civic buildings, many of those would have been quarried out from the excavation of Al Khazneh and other monuments.”

To many, Petra and its iconic Treasury building (most likely intended as a tomb in actuality) will always be the place where Indy went to face down the Nazis and rescue the holy grail from evil. That’s what Hollywood magic will do. But perhaps the next time this iconic scene plays out in this iconic movie, viewers will give some extra thought to the extraordinary feats of engineering that made it all possible.

For Further Discussion
The question has been asked time and again: How did they do it?Dr. Glenn Corbett, Associate Director, American Center of Oriental Research