An Empty Town for Autonomous Cars

An Empty Town for Autonomous Cars 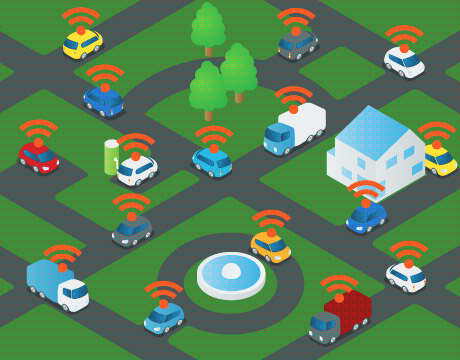 Just when is an automated car ready to hit the road? How does a car manufacturer test a driverless vehicle enough to know it can handle every situation the nation’s streets have to offer? How can you put connected vehicles in dangerous scenarios without simultaneously putting conventional vehicles, and their flesh-and-blood passengers, in dangerous scenarios as well?

The answer can be found at a facility at the University of Michigan known as Mcity. This test track—or test environment, as its facilitators call it—is a ghost town made to put autonomous and connected vehicles through their paces.

The model municipality includes a wild variety of driving conditions. Its 32 acres includes five miles of road for test cars to travel. Those roads are asphalt, concrete, gravel, brick, and dirt. They can be two, three, or four lanes, and can pass through tunnels, circle around roundabouts, and travel under stoplights. There are curves, ramps, bike lanes and hydrants, and benches. And to complete the feeling that the place is a fake town, akin to the decoy Rock Ridge at the end of "Blazing Saddles," there are moveable “buildings” that are nothing more than facades, as well as cutout pedestrians, both stationary and mechanized. “We made sure all the designs were diverse, with different curve designs, intersections, and pedestrian crossings,” says Huei Peng, a mechanical engineer at the University and the associate director of the Mobility Transformation Center. “They’re all a little bit different.” That way car manufactures can know their vehicles have been tested in situations found across the country.

But the pavement, the structures, and the layout of Mcity are only one part of what makes it an ideal testing ground. The rest is to be found in the numbers behind the scenes. “If you just blindly drive your car on regular streets it takes 100 million miles to experience a fatal crash,” says Peng. “We believe that in our test environment, it’s more accelerated.” Peng and his colleagues know just how to accelerate that testing thanks to the incredible amount of driving data they’ve amassed. They’ve recorded more than 1.2 million hours of driving, which translates to 35 million miles of driving, more than 5 million separate trips, and includes 400,000-odd lane changes. With such a storehouse of data, Peng, and auto manufacturers, can zero in on risker road scenarios and driving behaviors. “When we analyzed human driving data, we extracted the dangerous part of the statistic,” says Peng. “In other words, we will be able to emphasize or amplify the number of dangerous lane changes. For the safe lane changes, we don’t have to test them. That’s how we accelerate testing.”

Similarly, the data allow for better testing of so-called “diabolic scenarios.” “You could try to brainstorm scenarios and impose them on vehicles,” says Peng. “But the question is, how severe? What is the speed, the timing, the relative direction? Some companies try to come up with challenging scenarios, but I don’t’ know how they determine those values. We will chose them based on observations of human behaviors, really bad ones, but ones that represent real world driving. We try to play these risky behaviors on the test track.”

Thanks to the heightened risk of any test, the runs tend to be short. The testers can then examine what happened, tweak perception and control algorithms, and go back and try it again. Once they’ve finessed their system to handle one dodgy situation, they can run a similar scenario at different locations in Mcity.

So in 20 years, or ten, or whatever the number may be, when you’re getting some extra snooze in on the way to work, playing cards with the kids on the way to Mount Rushmore, or just enjoying the view with your full attention, you’ll know your automatic vehicle will get you there safely thanks to that simulated town in Michigan, Mcity.

For Further Discussion
We will be able to emphasize or amplify the number of dangerous lane changes. For the safe lane changes, we don’t have to test them. That’s how we accelerate testing.Huei Peng, associate director, Mobility Transformation Center