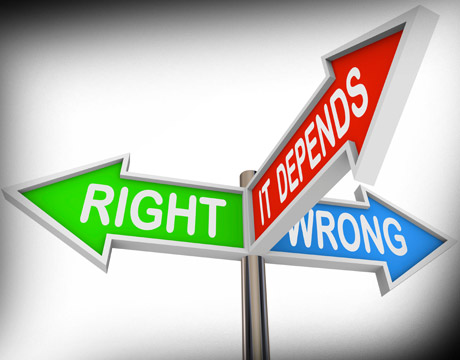 Ethics in engineering has evolved considerably over the years as engineers recognize their responsibility to society in not only bringing new technology, discoveries, and designs to the world but also in protecting the public interest as they do so.

While case studies in ethics discussions still include examples of major design flaws, much of the focus today is also placed on general professional ethics, and engineers are reminded of their responsibilities starting in early-college coursework and progressing throughout their careers in continuing education courses.

Early on, the obligation to hold the public interest in the highest regard was considered a personal responsibility, not a broad professional industry concern. But the thinking changed when public and private projects–bridges, tunnels, factories, private vehicles, public transports, power plants–endangered citizens, and that led to the establishment of codes of ethics by professional engineering societies. States also began considering and legislating licensing requirements. Today in the U.S., regulations about the licensing of engineers are governed by each state, and many engineering organizations have not only adopted codes but also set up boards to interpret the codes and issue advisory opinions on ethics cases.

For example, the Board of Ethical Review of the National Society of Professional Engineers has issued around 500 advisory opinions since its formation in 1954. In the last two years, the cases have dealt with a number of topics and run the gamut from conflicts of interest to issues related to serving as an expert witness to acceptance of gifts and other payments.

Joachim Heberlein, engineering professor at the University of Minnesota, says of continual concern is the issue of data falsification. "It's sometimes inadvertent and sometimes consciously done," he says. He adds that another major concern is plagiarism among not only students but also scientists. "It's become rampant. Every journal editor is battling that."

William M. Worek, dean of engineering atMichigan Technological University, says there are related concerns about how to handle intellectual property in regard to confidentiality and attribution. He believes science is now doing a better job of attribution when it comes to displaying other people's work, in part, throughplagiarism detection programs now available.

Issues of plagiarism and attribution of material often are an engineering student's introduction to ethics in college. Margaret Bailey, professor of mechanical engineering at Rochester Institute of Technology, believes there needs to be much more. She is considering proposing a course or workshop that conveys the responsibility engineers have in the discussion about the impact on society of the designs they make.

After teaching a class this year that combined advanced thermodynamics and public policy, particular related to energy issues, Bailey says it was clear "The students didn't strongly identify with a responsibility of our profession to be engaged in such dialogues." She was surprised they did not grasp they have a responsibility to not only design things but also participate in how they are legislated and how they impact the planet.

[Students] did not grasp that they have a responsibility to not only design things but also participate in how they are legislated and how they impact the planet.Margaret Bailey, professor of mechanical engineering, Rochester Institute of Technology