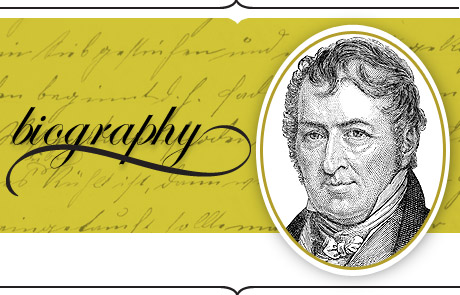 Even more than the cotton gin, the mass production put into motion by Massachusetts farm boy Eli Whitney (1765 – 1825) in his push to manufacture muskets was certainly one of the biggest steps in the development of the modern industrial age. In fact, many would argue that Whitney's conception of the uniform part should outweigh his cotton gin in the annals of history, but alas, popular history favors invention over process.

The young Whitney was a natural tinkerer. Supposedly he once stayed home on Sunday, while the rest of his family went to Church, so that he could take apart his father's watch. He had it together again and working by the time they returned. He also made a violin at the age of 12. Soon after, he had started his own business forging nails and had even employed help to do so.

After graduating from Yale, Whitney accepted employment as a tutor in South Carolina, though he feared the (literal) climate of the south. But he never made it to the job. On the way he met Catherine Greene, the widow of General Nathanael Greene, who invited him to stay at Mulberry Grove, her estate in Georgia. There, Whitney learned from Catherine Greene and other plantation owners of the difficulties of dealing with cotton. The seeds of the short seed cotton that grew so well in the south were notoriously difficult to separate from the cotton fibers. There were cotton gins at the time, but they were of the roller sort—they squeezed cotton between two rollers, in the fashion of a wringer. The seeds, being too big to fit between the rollers, were thus left behind. Unless they were crushed—in which case they became part of the end product. These roller gins also required skilled and strong laborers to operate them, and the best of them produced 250 pounds of cotton a day.

Whitney, who received notice that his tutoring position was no longer waiting for him, set to work examining the first cotton ball he'd ever laid hands on. There is a historical debate as to whether Whitney relied on the insights of Greene, the slaves on her plantation, or his own insights alone, but soon he had a crude model of a machine that could pick the fibers from the seed with hooks through a kind of screen. The manager of the estate, Phineas Miller, offered to buy the rights to the machine outright. Instead, they worked out a partnership where Miller would pay for the further development of the gin in exchange for future profits.

Within a matter of months, Whitney had a machine that plucked the fibers from the seeds 10 times faster than any existing method, though arguably the product was of a lesser quality, since the Whitney gin tore the fibers.

In 1793, Whitney returned to New Haven and started manufacturing his cotton gin. Knowing that they would never produce enough gins for all the cotton planters of the south, Miller and Whitney conceived of a business plan whereby they would gin a farm's cotton themselves in exchange for two thirds of the end product.

This didn't seem like a good deal to the farmers. And though Whitney's invention may have been a masterstroke, reproducing one was no difficulty for the mechanically inclined. Bootlegged and improved gins were soon ginning cotton all over the south, and Whitney's patent of 1794 did little to halt them. A fire that destroyed Whitney's shop didn't help matters.

When Miller and Whitney got around to suing for patent infringement, they lost their initial case, thanks to the still primitive patent laws of the time. Eventually the pair decided to sell and license their invention, rather than process cotton themselves. They also started to win patent cases. But by the time all these ducks were in a row, the patent was about to expire.

While Miller waged their lawsuits for a decade, Whitney turned his mind to the mechanics of another kind of war. The young U.S. army could not produce enough muskets. As every gun had to be produced by hand, the U.S. armory produced only 1000 muskets in its first three years. Envisioning mass-produced weapons with interchangeable parts, Whitney wrote to the Secretary of Treasury offering to make between 10 and 15 thousand muskets. He was a granted a contract, to be completed in two years. But in two years Whitney had not produced a single musket, though he had stacks of parts. He was granted an extension, and several years later—after a demo in Washington of his interchangeable parts—a second extension. Finally, in 1801, he delivered 500 muskets. It would be a full 10 years before he fulfilled the rest of the contract. But the means of production had been introduced to the world.

Whitney didn't marry until he was 52. Children soon followed, but so did prostate cancer. Though he developed private instruments to relieve his pain, he succumbed to the disease in 1825. He'd spent the last years of his life researching his condition, but, unfortunately, for the human body, there were still no interchangeable parts.

Within a matter of months, Whitney had a machine that plucked the fibers from the seeds 10 times faster than any existing method.