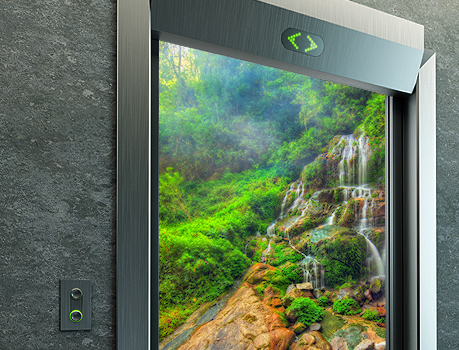 Elevators have come a long way since Elisha Graves Otis invented a safety device in 1853 that made lifting devices a practical reality for public use. His invention prevented an elevator from falling should a cable break. Today, a major focus on elevator improvement is on design and environment-friendliness.

“We are definitely seeing an increased demand for the latest green technologies,” says Mary Ryan, senior product manager for new equipment in North America for Otis Elevator Co. She says the most recent developments involve reducing energy consumption while offering a smooth, quiet ride and greater design freedom even though the industry has made continuous improvements over the years in designing elevators that are more energy efficient, cleaner, and more compact than ever.

The latest major innovation in elevator technology came in the 1990s with the introduction of “machine-roomless elevators,” or MRLs, which allow most of the components to fit within the shaft where the car runs. Only a small cabinet houses the elevator controller. MRLs also save on construction and operational costs.

In addition to Otis, most other major elevator manufacturers, including Kone Corp, Schindler Elevator, and ThyssenKrupp Elevator, have developed their own versions of MRLs for the U.S. market, although the technology has been in use in Europe longer than in the U.S. This has been due to the time it has taken to align U.S. building codes and regulations with the new technology and new designs.

John Sellen, project manager for Lerch Bates Inc., an international elevator consulting firm, has seen the industry make much progress in his more than 30 years working in the industry, including at ThyssenKrupp Elevator, Dover Elevator, and Fujitec Elevator. According to Sellen, MRLs are replacing traditional geared traction elevators that have dominated the mid-rise elevator market from five to 15 floors for over 50 years and is also making a dent in the market for higher-rise hydraulic elevators.

“The gearless machine-roomless elevator segment is the fastest growing segment in North America as people move to greener technology and away from hydraulic elevators. Right now, it is about one-third of the market and continues to grow steadily,” says Ryan.

Otis’ latest versions, Gen2 and HydroFit systems, do not require a machine room or a control room, which means significant space savings. “At the same time, these latest systems are designed to minimize energy consumption,” Ryan says. “For example, the Gen2 system’s standard ReGen drive captures energy normally wasted as heat and feeds it back to the building’s electric grid for use by other systems.” Gen2 models reduce energy consumption by up to 75%, aided by using LED lighting and an automatic sleep mode for lights and fans to increase efficiency.

In an article for Reed Construction Data, Bill Glas, product manager for Schindler Elevator, writes that although each MRL elevator manufacturer has slightly different variations, the motors generally use up to 40% less energy than more traditional geared traction motors and because the motors are smaller, they generate less heat, further reducing the HVAC load.

There are good reasons for the growth of this segment, Glas says. “Specifying and installing MRL elevators offer tangible advantages for everyone—the design community, the environment, users, and owners.”