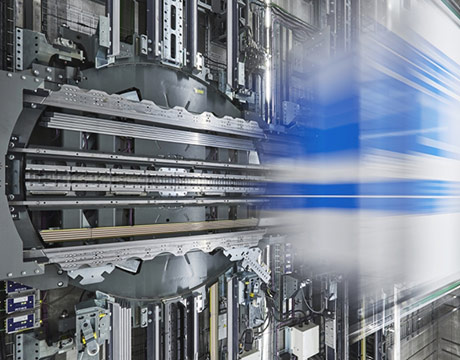 Roald Dahl’s classic children’s book Charlie and the Chocolate Factory was considered a work of fantasy when it was published in 1964. After all, along with nut-sorting squirrels and teleportation via television, the book describes the eccentric Willy Wonka’s ingenious glass elevator that “goes up, down, sideways, and every other which way you can think of going.”

Now over five decades later, German engineering firm Thyssenkrupp Elevator AG is turning the “Wonkavator” into reality. The company has developed the Multi, a rope-free elevator that can travel both horizontally and vertically in a single shaft.

Elevators may not be an obvious venue for innovation, as the business is very conservative. “But as buildings are growing higher and higher, it becomes obvious more and more that the traditional elevator is a limiting factor and a bottleneck for the constructors of visionary buildings,” said Markus Jetter, head of product development at Thyssenkrupp Elevator.

To avoid those bottlenecks, Thyssenkrupp’s technology enables multiple elevator cabins to run in a loop and the cars move via a magnet-based linear motor drive system, similar to that found in Maglev trains. The elevators have an “exchanger,” which can switch from vertical to horizontal to allow for sideways movement.

The system, Jetter said, activates only those sections where the cars are located, so energy is consumed only where cars are areaccelerating, moving steadily, or decelerating.

“The absence of ropes may give a different first impression but that isn’t true in any respect,” he said, adding that the linear motors are safe because they need to be energized before they move. Without electricity, the cabins won’t move.

The cabins also include emergency batteries so they can continue to run in the case of a blackout.

In June, Thyssenkrupp displayed a fully functional unit in an 870-foot test tower in Rottweil, Germany. The company is now working on getting international certifications. OVG, the developer of smart office buildings, will be installing the elevator system in the East Side Tower in Berlin.

Besides being one of the first new innovations in the elevator industry since the invention of the safety elevator some 165 years ago, the Multi promises to reduce peak power demand by as much as 60 percent, compared to conventional elevator systems.

“Multi offers a 50 percent higher transportation capacity. That means the same amount of people can be commuted with half the number of shafts. This is particularly important as elevator shafts can occupy up to 40 percent of the floor space in a typical tall building,” Jetter said.

The Multi won’t have all the features of the Wonkavator, though. In the book’s sequel, the Great Glass Elevator flew to an orbiting space hotel.

For Further Discussion
But as buildings are growing higher and higher, it becomes obvious more and more that the traditional elevator is a limiting factor and a bottleneck. Markus Jetter, Thyssenkrupp Elevator AG