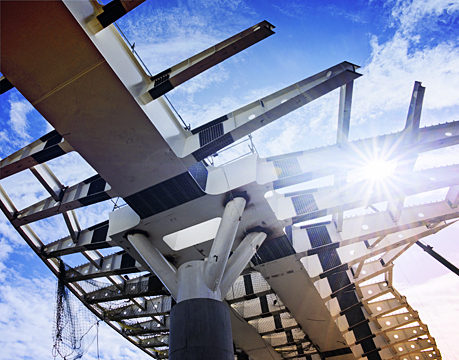 Shape shifting materials sound like the stuff of science fiction, but they’ve been known for decades and are used in a wide range of applications, from bio and mechanical engineering to dentistry. Seismic engineering researchers now have latched on to the material and promise to expand its use even more by designing “elastic” bridge connections that would deform during an earthquake but then spring back to its original shape. If successful, the design would prevent serious structural damage or collapse and allow a bridge to remain open after a quake, a time when roads and bridges are critical for emergency response.

Nickel titanium is the primary Shape Memory Alloy civil engineering professor M. Saiid Saiidi is working with at the University of Nevada, Reno, because of its “superelasticity,” he says. Other SMAs are generally only temperature sensitive, requiring a heat source to return to its original shape. Nickel titaniumis a bit different and has 10 to 30 times the elasticity of steel or other standard metals. In many ways it performs like steel, but it differs in its ability “to undergo a large deformation and come back to its original shape,” Saiidi adds.

Building robust bridges and other significant infrastructure in highly seismic areas such as California and the western U.S. could significantly lessen damages after a large quake. The 1994 Northridge earthquake in southern California caused an estimated $20 billion in damage to roads and buildings.

With funding from the National Science Foundation using the foundation’s George E. Brown, Jr. Network for Earthquake Engineering Simulation, Saiidi and colleagues tested the material at Nevada-Reno’s shake table. They used bridge models of 120 feet to 130 feet long, with three types of columns: standard reinforced steel and concrete, nickel titanium and concrete, and nickel titanium and engineered cementitious composites, with cement, fiber, water, and chemicals. The columns were first tested using OpenSEES, and earthquake simulation program developed at the University of California, Berkeley, and then built and tested on the shake table. The columns with nickel titanium outperformed the standard design under forces equaling or exceeding those of a magnitude 6 quake on the Richter scale, Saiidi says.

“In bridges, typically the column is most susceptible [to seismic shaking], specifically at the end zone at the top and at the bottom, by the footing,” he says. Because nickel titanium is much more costly than standard steel reinforcing bar, the researchers specified its use only in those zones, a little more than one-tenth the length of the overall column. Nickel titanium bars were assembled into cages just as a standard rebar cage, and connected to the column’s main cage in the plastic hinge zones, he says.

Saiidi’s test caught the attention of the Federal Highway Administration and Washington State’s Department of Transportation, which funded similar research. The agencies are using the design for a highway ramp that is expected to begin construction in 2015, he says.

Nickel titanium—the generic name for the family of alloys is nitino—has been around since the early 1960s from work at the Naval Ordnance Laboratory. It has many applications in a number of disciplines. Among other applications, the U.S. military has used nitinol couplers in F-14 aircraft to join hydraulic lines. In medicine, the material is used as a guide for catheters in blood vessels and anchors to attach tendons to bone in orthopaedic surgery. It also is used in robotic actuators and micromanipulators to simulate muscular movement.

“The first time I learned about it was from a mechanical engineer building an actuator,” says Saiidi. “Later, the question I asked myself was, ‘What if we used it inside a concrete column in a bridge in a high seismic zone?’”

That was about twelve years ago, and Saiidi’s research has progressed, also using other copper-based shape memory alloys. He says copper holds promise but civil seismic work is hampered by its scarcity. Only one manufacturer—in Japan—currently fabricates the material.

Nitinol also costs more than standard steel and suffers from limited sourcing. Saiidi says a bridge built with columns incorporating nickel titanium will cost about 3% more than a structure with standard materials. The savings will come in reduced maintenance costs—nickel titanium is highly resistant to corrosion—and its ability to withstand seismic forces, he says.

“Several manufacturers make SMA wires,” he says, noting nitinol is commonly used for orthodontic braces and eyeglass frames that “bounce” back to their original shape if bent. “Only a few make bars.” In Washington, the bridge design using the material calls for sizes up to 30 millimeters, he says.

“But if you look at lifecycle costs, it will become economical after an earthquake. You won’t have to shut the bridge down,” he says. “After an earthquake is when you need bridges the most.”

For Further Discussion
The first time I heard about [nitinol] was from a mechanical engineer. Later, the question I asked myself was, 'What if we used it in a concrete column in a bridge in a high seismic zone?'Prof. M. Saiid Saiidi, University of Nevada-Reno