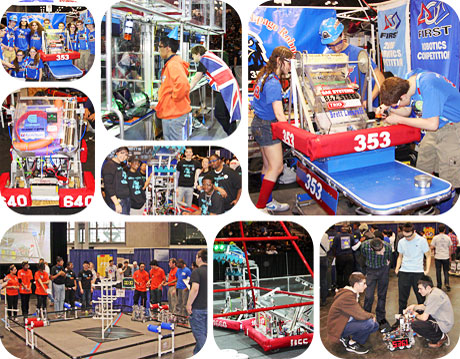 In recent years, universities, industrial firms, and the Obama Administration have joined forces in the national effort to steer young people to careers in science and engineering. Promoting STEM has been a hallmark of ASME programs for decades, with Dan Koenig, who served as ASME president during the 1995-1996 fiscal year, among the Society’s former presidents who have played a significant role in building enthusiasm for a variety of STEM initiatives, including FIRST (For the Inspiration and Recognition of Science and Technology).

As Past President Keith Thayer recalled in his ASME Oral History, Koenig was one of the catalysts for building the ASME/FIRST relationship. “We need to give Dan Koenig credit for emphasizing [the importance of FIRST to] ASME,” Thayer said.

Koenig was introduced to FIRST by then U.S. Coast Guard Academy Professor (and past vice president, Pre-College) Vince Wilczynski, who was running a regional FIRST team for graduate students. Koenig returned to ASME enthused about the organization and stressed the potential for a successful alliance.

Thayer also recalled the uncertainty as to how the two organizations would be allied, and what function ASME could support. In 1996, FIRST had a total of less than 100 teams. ASME decided to provide volunteers as judges, mentors and event supporters at the regional level, and began supporting FIRST teams.

When Thayer made a bid for ASME’s presidency that year, he asked Wilczynski to draft a document for ASME leadership outlining the FIRST program. How to Start a FIRST Team explains preparation, scheduling and provides advice on financing for aspiring teams – and it is still in use by teams today.

“Vince Wilczynski wrote a beautiful document that has been used by FIRST all over the United States,” Thayer recalled. “Because of that document, we cemented the relationship between FIRST and ASME.”

ASME and FIRST would soon further solidify their relationship with an Agreement of Affiliation, which served as a basis for ASME participation. The agreement aimed to “foster the technological literacy of society.” 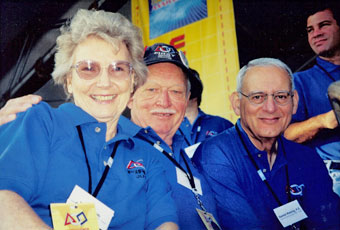 ASME Past-President Keith Thayer (center), Auxiliary member Nina Webb and Past-President Daniel Koenig.
FIRST has experienced tremendous growth since its maiden robotics competition in a New Hampshire high school gym. Twenty-eight teams competed in that inaugural championship event, dubbed Maize Craze. Today, FIRST is celebrated by government, industry, NASA engineers, inventors, and captures the attention of major media outlets. While scholarships were not distributed until 1996, there are now over 150 providers funding over $15 million in scholarships in 2013.

More than 10,000 students filled the floor of a huge domed stadium in St. Louis for the 2013 FIRST National Championships. Many of the students were there to participate in The FIRST Robotics Competition, the championship’s showcase event. In this “Varsity Sport for the Mind,” teams demonstrated robots designed to roam a field, place discs inside a goal post, and climb a pyramid.

Among the enthusiasts present were several ASME past presidents, including Thayer, Sue Skemp, Robert Simmons, and Marc Goldsmith. A longtime supporter of the FIRST organization, Thayer served as a judge, and was joined by several other volunteers and mentors, including ASME Governor Betty Bowersox, Auxiliary President Kay Simmons, member Nina Webb and Willard Nott, past vice president, Board on Public Outreach.

In front of a sporting event-like crowd of 25,000, awards were presented for industrial design, research and quality. Grammy Award winning entertainer will.i.a.m was honored with the “Make it Loud” award, given by FIRST founder Dean Kamen. His contribution: Increasing awareness of FIRST to the general public.

“I’m proud to help FIRST inspire young people to pursue science and technology careers,” will.i.am said. “The experience that students gain – and the values they learn – in FIRST programs are crucial to creating the innovative problem solvers of tomorrow.”

An important aspect of FIRST involves scholarships for promising students. As one of FIRST’s scholarship providers, ASME offers qualified students the Lucy and Charles W.E. Clarke FIRST Scholarship (formerly ASME-FIRST). Funded by the ASME Foundation and the ASME Auxiliary, the FIRST-Clarke Scholarship recognizes and rewards students whose FIRST experience inspired an interest in pursuing an engineering career. The scholarship is offered to high school seniors active on a FIRST team; it is ASME’s only Society award to a high school student.

Since 2000, ASME has given over 90 awards to participants on FIRST teams, and in 2013, eleven scholarships totaling $55,000 were distributed. One of the recent award winners is 2nd year UCLA mechanical engineering student Adam Ethan Garcia.

Garcia competed on FIRST teams throughout his entire high school experience. “I was very fortunate to have received the FIRST Clarke Scholarship,” Garcia said. “Because of the scholarship, I was able to pursue research at such an early stage in my career.” Many of my friends had to work to pay educational expenses.”

Garcia believes that his participation in FIRST provided him with an important leg up as he began to establish his career in the field of engineering. Having recently been named as the 1st prize winner in the UCLA Center for Excellence in Engineering and Diversity 9th Annual Research Intensive Series in Engineering for Underrepresented Populations (RISE-UP) Poster Competition, Garcia was recognized for his work with characterizing magneto refractive glass, which exhibit a relationship between refraction and an applied magnetic field.

With his high school just 20 minutes from UCLA’s campus, Garcia continues to contribute to FIRST projects, serving as one of several mentors on a team. “FIRST has given a lot to me and I want to give back,” he added.

“ASME and FIRST share an important goal, which is to raise awareness among young people about the role of science in everyday life and about the enrichments – and fun – of a career in the field,” he said. “The Society is very proud of its association with FIRST and very proud to contribute its resources to the competitions.”