An Early and Instant Check for Breast Cancer

An Early and Instant Check for Breast Cancer 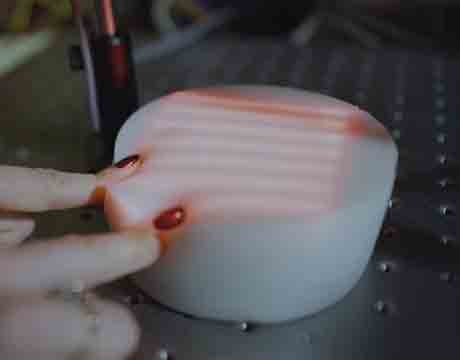 Researchers test their system by imaging a compressed model breast using a camera and a laser projector. Image: Carnegie Melon

Breast cancer can best be treated when it’s detected early. But the equipment doctors use to detect and monitor suspicious lesions on the breast is invasive, large, and expensive.

But that could change as Jana Kainerstorfer, assistant professor of biomedical engineering at Carnegie Mellon University in Pittsburgh, and doctoral student Constance Robbins continue to develop a hand-held device to noninvasively check how lesions change over time.

“The goal is to develop an inexpensive, noninvasive, yet quantitative monitor of the physical and physiological characteristics of a breast lump that could be used in both the doctor’s office and by the woman at home,” Kainerstorfer says.

The researchers created a device that uses near-infrared light to optically image the tissues.

“Malignant tumors contain greater water concentration and less lipid concentration than surrounding tissue and [have] a high concentration of blood vessels,” Kainerstorfer says. “These changes can be monitored optically, based on near-infrared light interaction with tissue.”

Here’s another innovative method researchers are using to detect cancer.

Adding optical imagery expanded the work of James Antaki, a professor of biomedical engineering, and Molly Blank, a 2016 Carnegie Mellon graduate now at the University of Washington’s department of bioengineering. Blank’s hand-held device compared a lesion to the surrounding tissue, creating a topographic image that can be examined for the size, shape, stiffness, and location of the deformation.

We demonstrated that we can image lesions, even deep inside the phantoms when compression was applied. That was proof of concept. Prof. Jana Kainerstorfer, Carnegie Mellon University 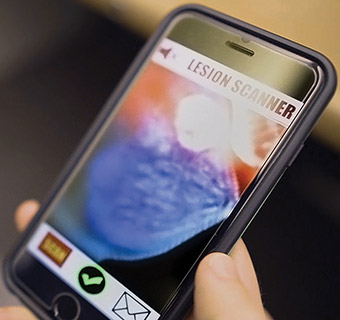 The system can send the near-infrared images to a smartphone. Image: Carnegie Melon.

“The light source is a projector and the camera can be a cellphone camera, [so] the depth penetration is limited to the superficial tissue layers,” Kainerstorfer says. “[However], we are compressing tissue such that the imaging depth does not create an obstacle.”

The optical innovation was important for younger women who have denser breast tissue.

The researchers developed breast cancer mimicking models (“optical phantoms”) to display the effectiveness of the imaging. The researchers settled on flexible polydimethylsiloxane with ink and titanium dioxide standing in as scattering and absorption agents.

“We demonstrated that we can image lesions, even deep inside the phantoms when compression was applied,” Kainerstorfer says. “That was proof of concept.”

The team plans to test the device on humans sometime in the next six months.

Neil Cohen is an independent writer.