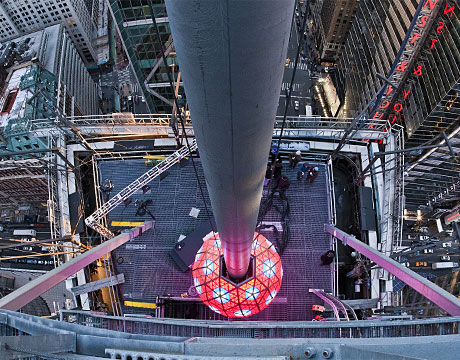 The New Year’s ball on the roof of One Times Square, view from above. Image: Anthony Quintano / Wikimedia Commons

New Year’s means many things to many people. A chance that next year may offer better things. An opportunity to reflect on the year gone by. A chance to celebrate with friends. And if you happen to be in Times Square in New York City, there may be about 1 million friends to celebrate with.

But there’s no doubt that much of the world is watching, and waiting…waiting for the ball to drop in Times Square. For a city like New York, this is a chance to showcase that it truly is the crossroads of the world.

John Trowbridge is very much at the center of it. With a background in entertainment production, he’s the project manager for the ball drop, with The Wolf Productions, LLC. In other words, if you enjoy setting your year off with a bang, he’s one of the key people to thank.

“Twenty one years ago now a client called and said: ‘I have the perfect event for you,’” he says. “At the time, the ball drop was done via a control system that ran wire from building to street all the way uptown four or five blocks and used computers to boost the signal. The ball is permanently on the roof now. It didn’t used to be.”

“There’s a winch that is directly underneath the mast and cables go up all the way to the top of the mast through what I call ‘headblocks,’ and then they come down and lift the ball,” he says. “There’s a computer system that drives the whole thing.”

In terms of lighting, the ball has 32,256 Philips Luxeon Rebel LEDs grouped in 672 modules, he says. The software “e:cue” is the control system that drives the entire lighting system. And the timing of it stays accurate, he says. “There is a timestamp—that time is being set from the GPS system. We have a black box that receives time from the GPS system and makes sure it’s 100 percent accurate,” he says.

But they continue to look for ways to improve the New Year’s Eve ball drop experience. “The next improvement we would like to do is increasing the resolution on the LED panels,” he says. “We want the patterns and designs on the ball to continue to get better.”

And at the time of writing, he’s excited again to be a part of the event that has such a prominent place in society. “This is about as much fun as you can have,” he says. “The people love it and it’s absolutely become one of those iconic events. You just want it all to go off well and you can’t help but smile after it’s done. Then you go home and you can think about next year.”

This is about as much fun as you can have. The people love it and it’s absolutely become one of those iconic events.