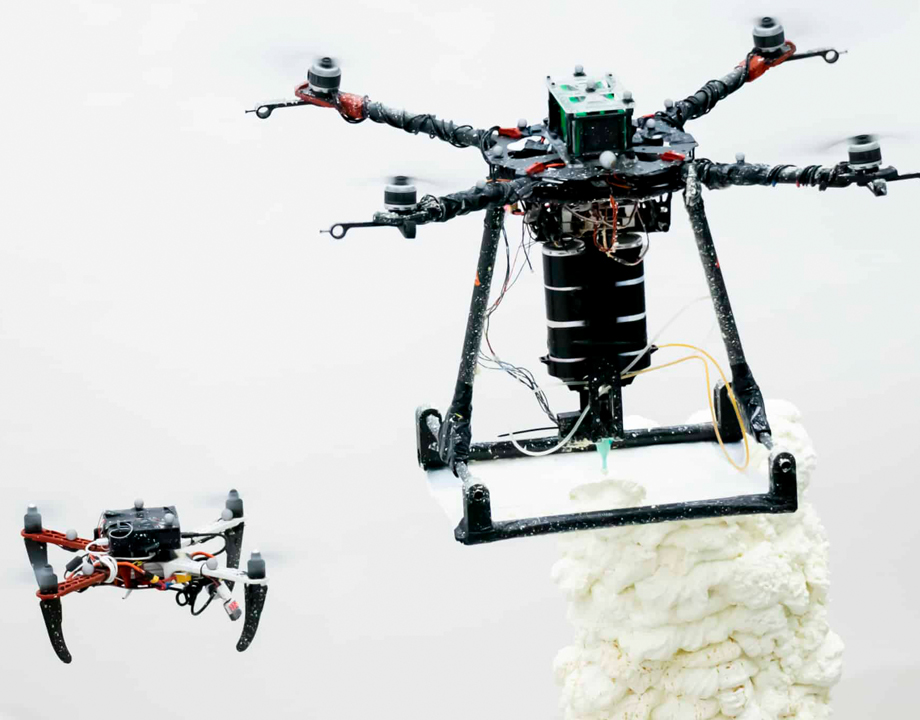 Researchers at Imperial College in London have developed a 3D-printing system that uses multiple drones to build vertical structures while in flight.

Building Construction Robotics
Image Credit:
Imperial College London
Robotic additive manufacturing methods are being retooled for use in the construction industry. There are currently two ways to use 3D printing in construction: 3D-printing structural components off site, then transporting those pieces on site for assembly, or using ground-based 3D printers to produce structures on site. But ground-based printers are limited in the size of the structures they can print.

Researchers from Imperial College London and the Swiss Federal Laboratories of Materials Science and Technology have developed a system that eliminates this scalability issue by using fleets of drones equipped with 3D-printing systems. Large and complex structures could potentially be entirely built with multiple drone-based printing systems that operate from the construction site.

The research team, led by Mirko Kovac, a professor aerial robotics at Imperial College, calls the new process “Aerial Additive Manufacturing” (Aerial-AM), in which a fleet of drones collaborate in flight to create large, intricate structures. A multi-drone approach allows for autonomous 3D printing under human supervision and real-time assessment of printed geometry as construction progresses. Drones can also monitor and adjust their building capabilities on the fly in real time.

Aerial-AM consists of a fleet of drones that work together from a single construction plan. These include “BuilDrones,” which autonomously extrude and lay down various building materials in-flight, and “ScanDrones,” which continually record the performance of the BuilDrones and communicate the upcoming manufacturing steps. 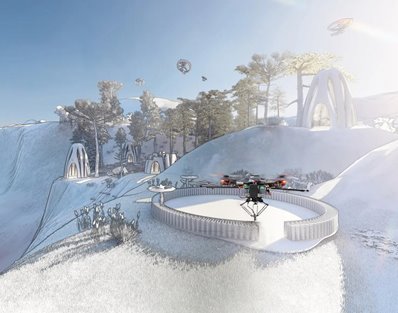 Drone fleets could offer a scalable solution that would help with construction and repairs on difficult-to-reach structures. Photo: Imperial College London
Both types of drones can work in three dimensions, either simultaneously or sequentially, and using a special building arm, can deposit building materials with manufacturing accuracy of a few millimeters. “One of the most interesting mechanical engineering aspects of the project was the development of a manipulator to compensate for disturbances to the drone trajectory and deposit material precisely,” said Lachlan Orr, a doctoral student who worked on the project at Imperial College. “The use of a delta-robot architecture rather than a conventional robot arm meant that the weight of the moving parts, and so movement of the center of mass of the drone, was minimized.”

During experiments, researchers used two different materials: one a foam and the other cementitious. These materials needed be lightweight for easy drone transport and easily extrudable (or printable), but also strong enough to be laid down on top of each other to form layers.

As a proof-of-concept, the drones were first used to craft a 2.05-meter-high cylinder with a 0.3-meter diameter made of 72 layers of the foam material. Next, the drones built another smaller cylinder that was 0.18 meters high and made up of 28 layers of the cement-like material. To see if their manufacturing method could be scaled effectively, researchers also conducted a simulation experiment that virtually printed larger structures successfully using 15 drones.

“We used a scanning drone to build a 3D model of the print in progress and took corrective action when errors in layer height began accumulating,” said Orr. “I think this scanning-in-the-loop process has a lot of potential and, in the future, could include structural analysis during the printing process to ensure the structure is sound at all times as it is put together.”

“To build bigger and faster, we will need to coordinate large numbers of drones,” Orr said. “This will require new path planning and collision avoidance algorithms. We will also need precise onboard localization and mapping so that we can operate outdoors without relying on external tracking systems. I would also like to see recharging and replenishment of material fully automated so we can take human labor out of the process entirely.”

You Might Also Enjoy: How Drones are Delivering Change in Ukraine— and Worldwide

Numerous researchers are exploring precise manipulation and environmental interaction with drones. Potential applications include placing sensors, collecting samples, and repairing cracks in major structures. The ability to repair-in-flight would also eliminate the need for scaffolding.

"We've proven that drones can work autonomously and in tandem to construct and repair buildings, at least in the lab,” said Kovac. "We believe our fleet of drones could help reduce the costs and risks of construction in the future, compared to traditional manual methods. Our scalable solution could especially help us construct and repair buildings in difficult-to-reach areas in the future."