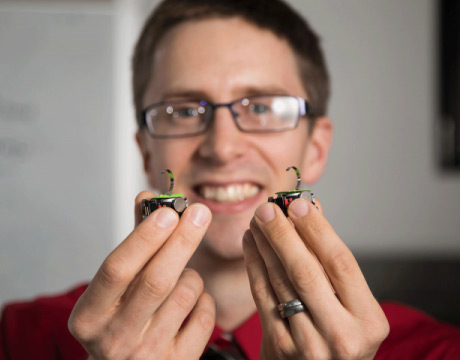 The Droids We’re Looking for, in the Cancer Fight

Robot soldiers are likely to fight our wars in the not-too-distant future, if you believe certain individuals from the Atlantic Council’s Cyber Statecraft Initiative (or certain “Star Wars” episodes). But now researchers at the University of Houston are creating robots for the war within.

Within the body, that is. They’ve proven that tiny capsules can be guided, with an MRI, through the blood stream, aligned at a target location, and then fired to attack a cyst or a tumor.

The idea first came to Aaron Becker, a professor of electrical and computer engineering at the university, while he and some colleagues were experimenting with moving robot arms in an MRI. The massive magnetic field created by MRIs was meant for imaging, but Becker and his colleagues were trying to use those same fields for the purposes of locomotion.

“The more we worked with the MRI, the more we realized how limited our forces were,” says Becker. “It became apparent that biggest thing I needed to solve was how to get more force.”

So he spent some time online looking at magnetic toys. He came across something called a magnetic accelerator, or a Gauss gun. In short, two groups of steel balls are kept in line and separated over magnets. When an additional trigger ball hits one group, it sends one of its balls over to the other group, which fires its final ball with much greater force than that provided by the trigger.

Becker found a piece of aluminum and some steel ball bearings in the lab and 3D printed the other pieces he had in mind. “The next time we were in the MRI, at the end, probably at 2 am, I said, ‘Let’s try this other thing,’” he says. “We injected it in there. I was pushing the trigger mechanism, and it got closer and closer and then suddenly it snapped and something flew out the other side of the MRI, and I was like, ‘Ah we’ve found it, we’ve done it.’ Then we had to hunt to find that ball bearing, because it’s against the rules to leave it behind.”

In essence, Becker had shown that, by using the Gauss gun, the weak force provided by the MRI could be used to create a large enough force to puncture tissue. “The gradient field we have now is about 40 percent of gravity. That’s limited, but it’s enough that you can push things around, especially if in a fluid filled environment,” says Becker.

Of course, firing a toy in an MRI and firing a tinier version inside a body at a malignant growth are two different things. The capsulized elements of the gun need to be neutrally buoyant. And when they link together the action parts of the gun needs to be free of fluid.

Becker created three separate robots: the trigger, the barrel, and the delivery component.

“We call them robots,” he says. “But really the robot is the MRI plus the capsule, and you.”

The barrel and the delivery end align first and fire only when the trigger is brought into place. It self-aligns and then sets off a chain reaction to deliver a shot to the target.

The potential applications are many. The robots could deliver a radioactive seed inside a tumor, they could inject coils in an area that could be heated for cauterization, they could puncture cysts, and they could leave behind medication. They could also be used for taking internal biopsies with minimal invasiveness.

But before any of that happens in a real body, there’s plenty of work to be done.

“Right now we’re focusing on miniaturizing it, making it lightweight and small, packaging it up so we don’t release any air on assembly and so liquid doesn’t get in,” says Becker. “We want to make sure this transfer of energy happens in a fluid free environment, right up against our target.”

I was pushing the trigger mechanism, and it got closer and closer and then suddenly it snapped and something flew out the other side the MRI, and I was like, ‘Ah, we’ve found it, we’ve done it.’Prof. Aaron Becker, University of Houston