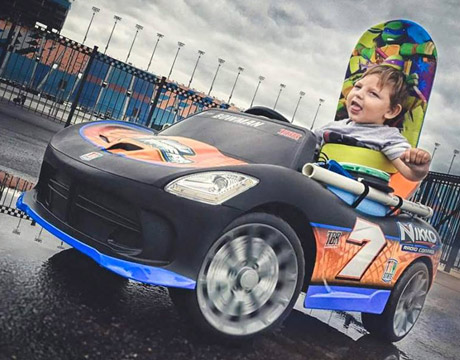 Children can interact with the world from behind their retrofitted and cushioned battery-powered toy cars. Image: Go Baby Go

Maybe you’ve seen a toddler or small child behind the wheel of one of those little battery-operated, cartoon-festooned toy cars. The University of Delaware-based Go Baby Go initiative now easily and inexpensively retrofits those cars so that children with mobility issues have a way to get around on their own.

“A child that can’t grab, sit, crawl, or walk misses out on the ability to make independent acts and decide when and where to move,” says Cole Galloway, director of the Pediatric Mobility Lab and Design Studio at the university, where he’s also a professor of physical therapy.

That makes for an isolating and lonely experience. Children can be “marginalized to the point of invisibility,” an experience that may last, or at least continue to affect children, their entire lives, he says.

“These kids do need assistance, it’s often practical and occasionally necessary,” Galloway adds. “But over-reliance on assistance is detrimental to their developing independence.”

While children with mobility issues can get around in pediatric wheelchairs, those devices cost more than $25,000 and families that request one have about a five-year wait to receive it. Also, the wheelchairs aren’t often available to kids younger than three.

There had to be a better way.

In 2007, Sunil Agrawal, a professor of mechanical engineering at the university, and Galloway created small robots for immobile or partially mobile children as young as six months old to drive around in and explore their world independently. The problem? The robots were expensive and took time to build.

Looking for a more cost-effective idea along the same lines as the robot, Galloway and his team took a trip to the toy store where they immediately spied a variety of battery-operated, ride-on toy cars, each costing about $100, he says.

Light bulb moment: Back in the lab, they were able to configure the cars at a low cost for kids to drive all on their own. “Heck, there’s a lot you can do with some PVC pipe, a pool noodle, some fabric, and modest electrical modifications,” Galloway says.

He and his team outfitted the car with push-button accelerators and PVC cages, so children could pilot the cars safely.

Galloway gives the example of Diamond, a four-year-old girl who lives in a residential facility for children with complex medical needs. Every day, he says, nurses pushed the girl’s wheelchair down the hall, past a series of bright murals.

Then Diamond was given a retrofit John Deere toy tractor through Go Baby Go for her to drive. It included a space for her ventilator. “A nurse told me, ‘Diamond’s seen these murals all her life, why is she stopping just now to look at them while she’s driving?’” Galloway says.

“That’s the science behind visual perception,” he adds. “Active, independent mobility literally changes our view of the world. Those walls came alive for Diamond when she swished by in her own car. She saw her world, again, for the first time.”

Where does the program go from here? Galloway and his team have modified push toys, which children sit on and push with their feet to move forward. The modifications allow kids to sit on them (while being held in place with an inexpensive PVC harnesses), then progress to standing, then move the toy forward by placing their weight on the foot pads. Then, if possible, the children progress to piloting the toy forward by kicking their feet against the ground.

Toys like these are useful in the developing world, where pediatric wheelchairs are even scarcer than in the US, Galloway says.

While the initiative has retrofit more than 100 toy cars for kids with mobility issues, that’s a drop in the bucket compared to the kids who need the mobility devices, he adds. To help, Galloway is seeking to get the Go Baby Go program instituted at other schools and other locations.

To that end, the Delaware faculty published a toy-car modification how-to online to encourage other pediatric physical therapists and occupational therapists to meet their patients’ mobility complexities through the cars.

Now, instructors in Creighton University’s departments of occupational therapy and physical therapy are hard at work modifying miniature, battery-driven cars. They use the online modifications, which are simple to follow, says Stacy Wong, an instructor in the physical therapy department at the university, located in Omaha, NB.

The modifications do need to be matched to the children and his or her specific needs, she adds.

The Creighton study allows for five children ages 18 months to five years to receive cars, with an eye toward expanding the program if the initial results are positive. Over a 12-week period, the study will ask parents to keep tabs on how often the child uses the car, what kind of benefit they see their child receiving, and how they see mobility being improved.

At the university, occupational therapy students Cody Funk and Alexis Woodie, and physical therapy students Thomas Myers and Brandon Barber, poked their heads under the hood of a flashy yellow Fisher-Price car to receive confirmation that their modifications have worked.

They plug a battery into the rewired electrical system, the new push-button accelerator is pushed, and the car’s wheels respond with a happy whirr. “When you’re a kid, life is all about being able to move and explore,” Barber says. “I hope in doing this we’re giving kids a chance to do that.”

For Further Discussion
Active, independent mobility literally changes our view of the world. Those walls came alive for Diamond when she swished by in her own car. She saw her world, again, for the first time.Prof. Cole Galloway, University of Delaware; founder of Go Baby Go