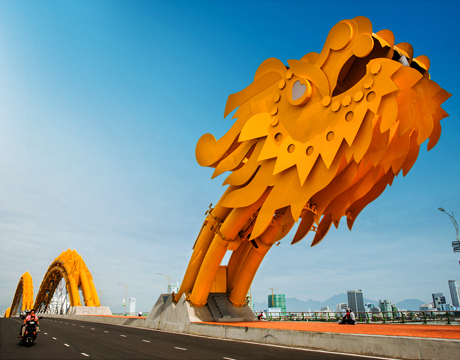 Long-span bridges, especially signature crossings like California’s Golden Gate Bridge or its new cousin, the San Francisco-Oakland Bay Bridge, are noted for their architectural grace and engineering prowess. In Vietnam, there now is a bridge that can be celebrated for what its designers call a “unique” interpretation of a single-arched bridge that doubles as performance art.

Da Nang’s 666-meter-long Dragon Bridge is just that: A design of hybrid steel box girders supported by undulating central rib steel and concrete arches modeled after a dragon hovering over the Han River. The “dragon” is formed by decorative steel plates attached to the arches that represent scales and a head on the eastern side that breathes fire and water.

“It is certainly an unconventional arch structure,” says Radu Dragan, senior associate for Ammann & Whitney, the New York City-based firm that won the design contract. “In terms of design, it satisfies the visual impact requirements. Structurally, it’s not the best approach.”

The design team worked through the challenge, arriving at arches formed of 4-foot-diameter steel tubes unconnected to each other and held in place with horseshoe-shaped steel “spider” frames. Steel suspender cables connect the arch with the deck at 8-meter intervals. Below the deck, the arch structure becomes reinforced concrete and is integrated into the piers.

The deck is wide, stretching across 35 meters to accommodate three lanes of traffic in each direction and pedestrian walkways.The center three spans are hybrid steel box girders supported by the arch. For the suspended portions, the deck superstructure is a box girder of a triple-cell steel box; prestressed twin-cell boxes are used for the sections over the piers. Further, 10.5-meter cantilevers extend from the box girders to bring the superstructure’s width to 35 meters. It extends another meter to meter and a half to accommodate the walkways.

Typically in bridges of such width, the deck is supported by arches on the outside of each deck, says Chris Gagnon, A&W senior vice president. During the design competition, the designers offered up the single-arch option in addition to a cable-stay design and the owner—the Da Nang city government—opted for the dragon.

“The arch was really different from everything else,” notes Dragan. “And we were able to land the bridge directly at street level. That was very important to them.”

The Dragon Bridge, which opened in April of this year, is Da Nang’s fifth crossing of the Han River and is expected to provide quicker and easier access to the seacoast, boosting local tourism. Gagnon points out that a typical cable-stayed bridge, which many cities around the world are using for signature bridge projects, requires abutments and elevated ramps to accommodate its height. The arch design allows the bridge to transition at street level in the heart of the city at its historic Cham Museum Square.

While they investigated the site, Gagnon says the team realized that river traffic did not require a high clearance. Most boats using the river are local sampans or other vessels with low clearance. That realization sparked the option for the arch bridge, which has a 12-meter clearance over the main shipping channel and preserves scenic views of the square.

But the main channel had to be moved to the eastern side of the crossing because the at-grade approach to the city center resulted in limited vertical clearance. The westernmost span is a variable depth cast-in-place prestressed concrete structure integral with the first pier. Competent rock on which to found the piers was found about 43 meters below the waterline so the piers are fitted within a “partially left-in-place cofferdam” to provide a permanent fixture below the river bottom and prevent scouring of drilled shafts.

A&W used 3D models and both proprietary and off-the-shelf software to review the design, which meets both local and international codes. “The deck is a hybrid, with a concrete deck and below, steel box girders,” says Dragan. “It is a complex structure, but not unique or unusual.”

Designers believe its uniqueness rests with the five steel tubes that form the arch. “There are no interlocking members,” points out Dragan. “It is certainly unusual and an innovative approach, especially having to connect the spider frame and the steel [tubes].”

For the connection to work, the design team decided to use a layer of neoprene usually associated with material used in expansion joints and bearings, says Dragan. It allows for movement and can be easily replaced during the course of the structure’s 100-year design life, he adds.

Construction was done by two Vietnamese contractors, one for the substructure and the other the superstructure. The steel spider frames and tubes were fabricated in China and erected by crane with supporting falsework.

Since its opening, the bridge has become a tourist attraction in its own right, says Dragan. Its arches are illuminated with LED lighting after dark and every weekend, the dragon’s heads spews fire and water. That system was developed and installed by local engineers.

Gagnon says the original design called for a two-headed dragon but the owner opted for one head, facing east. With a final cost of $86 million, he says, “It’s a low cost compared to its complexity.”

For Further Discussion
The arch has no interlocking members. It is an unusual and innovative approach.Radu Dragon, Design Engineer, Ammann & Whitney 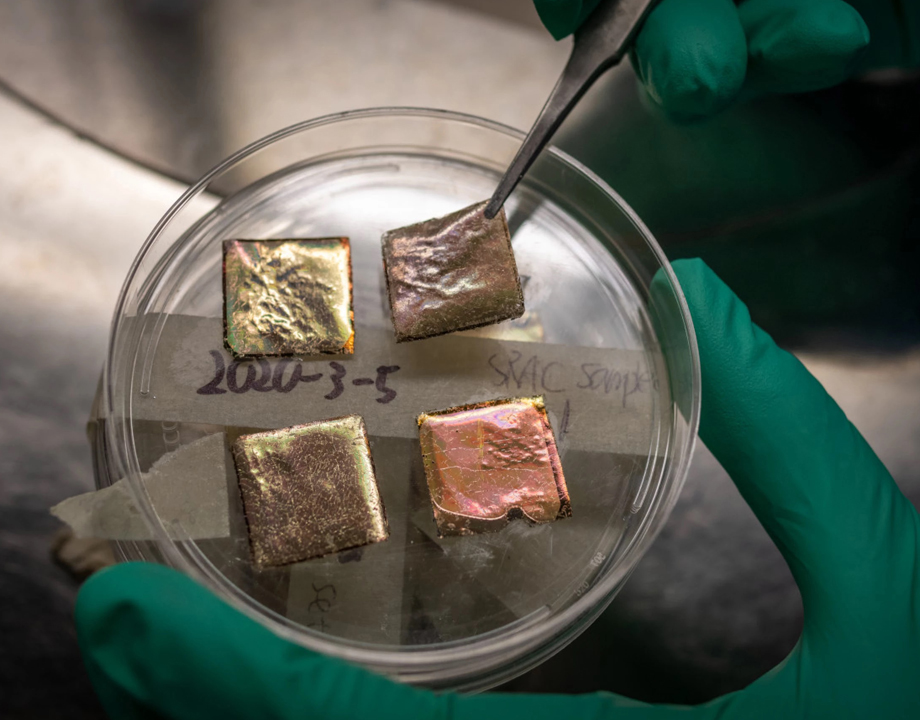