The pandemic has forced many engineers into work-from-home situations. Digital engineering tools that support distributed collaboration are being considered more thoroughly than ever before.

When Anna-Katrina Shedletsky was at Apple leading a team of 20 design engineers in delivering the mechanical design for the first-generation Apple Watch, she became very familiar with build events. Those events are actual manufacturing run-throughs, where all types of engineers who have worked on the project come together in one space to ensure that the parts they designed can be manufactured and put together correctly.

“At the first build, you’re lucky if your parts fit together,” she said. “I’ve been at builds where they messed up Pin One at the connection so you couldn’t even get to the initial build.”

When things don’t fit, the engineer in the field contacts the design engineers back in the office to make the changes. After those changes are made, round two of the build happens.

Because most of Apple’s devices are manufactured in Asia, most of the build events occurred there, too. Shedletsky traveled to China for builds so often she learned the language to help with communication issues. In January 2020, a leaker revealed via Twitter that Apple was buying 50 business-class flights every day from San Francisco to Shanghai, spending over $150 million per year on United Airlines. Shedletsky said the flights were probably mostly engineers flying to oversee builds to find and fix manufacturing issues with products.

Obviously, the COVID-19 pandemic has done away with those build-and-test events.

“Now, when you can’t travel to the factory floor, and might not even be able to see your direct teammates in person, the biggest challenge has been in finding ways to communicate complex, detailed information without being able to point at or touch things,” Shedletsky said.

“The development process is reliant on these individual engineers at the build identifying and solving issues quickly,” Shedletsky said. “They’re very much lauded in the engineering cultures. They do some crazy things to save the launch, and they’re a hero. But really, it’s an indicator of a nonresilient process.” 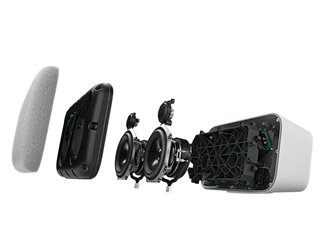 Products such as this Google Home Max smart speaker are comprised of complex parts designed by several distributed teams. The parts don't always fit together at first. Image: Google
With barriers to physical interaction cropping up, companies are turning more to digital engineering tools and the Internet of Things to assist in this critical phase of product development.

Recommended for You: Identical Twins

That may seem odd to engineers who are used to the current deployment of IoT, which is used mainly to monitor and capture manufacturing information. Feedback from IoT sensors alerts manufacturers to things like machine failure and drops in yields or quality.

Shedletsky, who today is the chief executive officer at Instrumental Inc., a company she co-founded in 2015 to produce remote quality monitoring systems, said that IoT can do much more to support the manufacturing process.

“That’s useful for process manufacturing, like making paint. But if you build highly complex discrete products with rapid cycles, you aren’t using machines to build them; you’re using people. It’s not about the process in those factories. It’s about the product and specifically, product quality, and variations from unit to unit.”


Tools that enable working and collaboration at a distance are critically important now. The COVID-19 pandemic has “forced us into a massive work-from-home experiment at a global scale, with little advanced planning,” said Jim Heppelmann, president and CEO of PTC at the company’s LiveWorx virtual conference held in June 2020.

“The world of engineering software simply has to go to the cloud,” he said. Moving forward, Heppelmann expects cloud, Software as a Service, IoT, and other tools that enable remote work to gain even more ground.

Still, Heppelmann acknowledges, much of the digitization of engineering technology is focused on design and CAD tools—that is, on the front end of design. 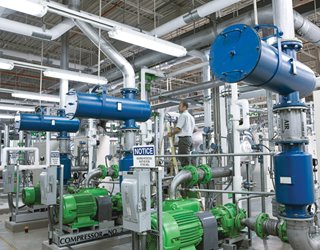 Companies that build industrial equipment, like these compressors from Atlas Copco, are discovering that their customers are beginning to demand built-in IoT capability. Image: Sierra Wireless
Kay Yang, a mechanical engineer specializing in product development, said the COVID-19 pandemic has accelerated her use of digital design tools. She works with startups, guiding them from a product concept to its commercialization, as well as on a monthly subscription homeschooling kit she created for hands-on build, prototyping, and experiments.

So far, Yang sees digital adoption happening more rapidly in the design and prototyping stage than in the “actual build” of the product. Increased digitization has meant a shift in the way prototyping takes place. Engineers are comfortable collaborating on a virtual prototype, even if they’re not in the same room. “We’re in Los Angeles, so we can’t physically meet and evaluate a prototype together, so we evaluate things digitally,” Yang said.

Yang would like to see design engineers, industrial engineers, and manufacturing engineers all working from the same file stored in the cloud. This would allow for a design for manufacturability (DFM), meaning creating products that are easy to manufacture.

“DFM wouldn’t need to happen at the end of the process. It could all happen in parallel,” she said. “It would go faster and be a better process because each person would be thinking about their vital steps at each iteration.”

The manufacturing process itself will be the hardest to convert to digital. The equipment can’t be easily changed, and the process requires people to work on the line, run the forklifts, and other tasks. Their work cannot be done digitally.

“DFM would be difficult to embrace downstream, because for the types of machining changes needed, millions of dollars of equipment would have to be altered,” Yang said.


Adding Internet of Things capability—or changing the way IoT is employed—may be one way to digitize later stages of the manufacturing process. Using IoT information to aid product development is not a revolutionary idea, Instrumental Inc.’s Shedletsky said. But until now, engineering companies have been slow to adopt the technology, and IoT vendors have been slow to produce it.

One place where Shedletsky hopes to see inroads is in the build event process. 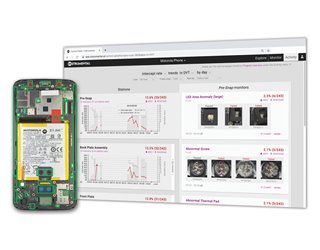 Cameras and Internet of Things sensors placed on the build line by companies such as Instrumental Inc. can monitor a product as it moves down the line. Data is sent back to engineers far removed from the factory so that they can track build quality and flag any defects. Image: Instrumental Inc.
While build-and-test events are labor-intensive, the intent is to avoid a replay of the Samsung Galaxy Note 7 fiasco. In September 2016, Samsung suspended sales of the Galaxy Note 7 and announced an informal recall after some of the devices caught on fire.

Samsung discovered a manufacturing defect in the batteries caused some of them to generate excessive heat, resulting in fires.

A rigorous build event should find problems like these early before production begins. “The idea is to identify issues that will cause problems and impact the customer,” Shedletsky said.

To reduce the need for engineers to monitor the build process in person, Instrumental Inc. places IoT sensors and other instruments on the build line to capture product data. They record images from key test sites on the line.

The information can then be accessed however the company chooses: In the cloud, on an FTP server, or at the company’s local site.

Take the example of Motorola Mobility, which used Instrumental’s technology on a mobile phone with a very short production schedule. The Motorola engineering team worked with Instrumental to identify a handful of states of assembly that would show all of the key components of the product as it was built up. Then, Instrumental Inc. deployed an array of inspection stations—which contained cameras, tunable lighting, and customized fixtures—to Motorola’s development line in China.

According to Wayne Morrison, a principal staff mechanical engineer at Motorola, one of the mechanical engineers on the project who was focused on designing the camera assemblies inside the device logged into the system from his office in Chicago and looked through the data. Within 12 hours of the two-week build event, that engineer uncovered a problem: one of the camera trim pieces was moving more than it should.

“It turned out, there was a tooling issue, where the part didn’t match the original CAD file,” Shedletsky said. “These kinds of mistakes happen. The engineer was able to identify it, live, from Chicago, even as the build was going on in Asia.”

The engineer sent CAD images to the supplier so it could fix the issue.

“The fix did cut into the build by a few days, but Motorola didn’t have to wait until the second build to fix the issue,” Shedletsky said. “If you can make tool changes early rather than when you have two million parts in the channel, you’d save significant amounts of money.”

As other manufacturers grapple with working remotely, digital engineering tools are being considered more thoroughly than ever before. For instance, Instrumental Inc. recently reported a threefold jump in inquiries from electronics manufacturers about its IoT platform.

For instance, Atlas Copco, a Swedish maker of air compressors, vacuum equipment, and industrial power tools, includes Sierra’s IoT technology on many of its tools.

“IoT and digitization are not new, but I will say COVID-19 has accelerated that trend,” Pauzet said. “It’s making a lot of equipment manufacturers realize they need that connection. In the past, they could go into the field to check on their industrial assets or perform regularly scheduled maintenance.”

Now that traveling to the industrial asset itself is often no longer an option, those who make industrial equipment acknowledge they need to add IoT capability if their products don’t already include it, Pauzet said.

With IoT, the live feedback returned from sensors and instruments operating in the field is digitized and sent to software, where manufacturers can easily tease out trends and identify equipment failure.

“Rather than sending someone out in the field to fix a nonworking asset, they can see the digital twin of each of their assets operating in the cloud and detect if something is going to go wrong,” Pauzet said. “Without IoT, they have no view at all. They just have to wait to get a call saying something doesn’t work.”

Of course, if a piece of machinery does malfunction, an operator will need to repair it. With IoT, however, manufacturers are more likely to predict the failure and take precautions to keep those maintenance workers safe, Pauzet said.

For Atlas Copco, the machine data collected allows the firm to provide preventive maintenance. Local service teams can deliver the right spare part at the right time for faster fault resolution, saving costs associated with breakdowns and production loss. It also empowers its customers who are using the equipment to manage energy usage efficiently, which further increases product reliability.

Ultimately, though, manufacturers of all sorts will face the challenge of deploying digital engineering technology not just as a feature for customers but as a tool for improving their own production processes.