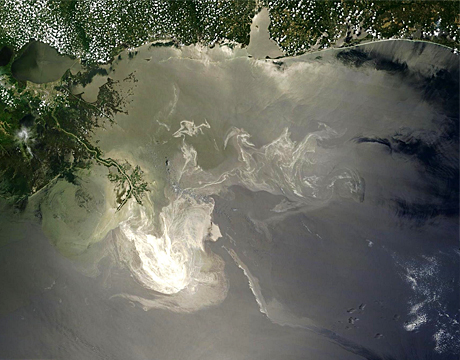 Satellite image of the lingering oil slick in the Gulf of Mexico near Mississippi River Delta on May 24, 2010. Image: NASA / Wikimedia Commons

After more than a decade of study and research, an MIT mechanical engineering professor’s work in early detection of where pollutants in the ocean will make landfall may be getting traction in the real world.

Prof. Thomas Peacock, an associate professor who teaches courses in mechanics, nonlinear dynamics, fluid dynamics, and experimental techniques, is active with researchers across the globe studying ocean dynamics and environmental flows. A key aspect of this work is how the movement of pollutants is controlled by invisible structures, called Lagrangian coherent structures. The ability to identify where pollutants, whether from an oil spill or debris from a tsunami, may damage a coastline can enable better and earlier disaster response.

The Deep Water Horizon oil spill and the Tohoku tsunami that hit the coast of Fukushima focused public attention on environmental issues, Peacock says, and highlighted how tough it is to predict where pollution goes in the ocean. “Any new techniques that could shed light on this would be of great use,” he says.

That’s exactly the focus of his work, which also draws on his background in dynamic systems theory, a branch of mathematics. “It’s an exciting field to be in and there has been huge progress in the last four or five years,” Peacock says. “It had been hard to make sense of because the flows are so complex.” Even though Leonardo da Vinci did a good job of drawing vortices in fluid motion that he saw in rivers some 500 years ago, being able to say what they are and describe them mathematically has been tough, he adds.

Recent methods of tracking ocean contaminants involved computer models estimating the likelihood a pollutant would travel a certain path. While more advanced than traditional methods, it doesn’t offer insight into why things went to one location and not another. Lagrangian coherent structure analysis helps identify barriers to the flow, which, in turn, facilitates the analysis of where particles are going to flow.

Now, the techniques have evolved so much that Peacock has had conversations with at least one major oil company about implementing the methods into oil spill strategies, and he is helping predict where debris from the 2011 Tohoku tsunami continues to hit the U.S. and Canadian west coast and is expected to continue for perhaps another five years.

“What’s so exciting is these methods that we write about in scientific papers are becoming things that people are using in the everyday world,” he says. “The main thing for me is the applicability to real-world problems … that these methods are taken up and used alongside existing techniques.”

The next milestone for Prof. Peacock will be the results of a project taking place early in 2014 in the South China Sea off the coast of Taiwan. Funded by the U.S. Department of Defense’s Office of Naval Research, the study involves using data measuring the ocean’s surface currents from high frequency radar to predict where the particular structures are and verifying those predictions by having a research vessel travel to those locations. “If that’s successful, that’s a step toward having a monitoring system [to identify] where these structures are [and be able to know] at any particular time the state of the ocean and where things are going to go,” he says. “In some cases, decisions [relying on this information] can be very important. In the case of search and rescue operations, it can be a matter of life and death.”

As a tool for understanding transport by any fluid flow, the techniques being developed have broad applications, not limited to ocean and geophysical flows. “Our lives are spent living in fluids,” says Peacock. “Someone in industry could use this to understand mixing in combustion chambers; someone in a hospital to understand injecting fluid into something and how it will be transported. A professor at Berkeley is using these techniques to understand blood flow and heart.” Others are looking at how these structures impact the ease of travel of all sorts of transports from airplanes to autos and whether new alert systems could help vehicles avoid some of these invisible barriers.

The possibility of so many practical uses for this new technique is one reason Peacock gets so excited with each step forward in his own work even though his focus is mainly on the ocean. “I would hope that the actual technique is something that will become a widely used tool throughout of engineering working with fluid flows,” he says.

Early detection of where pollutants in the ocean will make landfall may be getting traction in the real world.

What’s so exciting is these methods that we write about in scientific papers are becoming things that people are using in the everyday world.Prof. Thomas Peacock, MIT