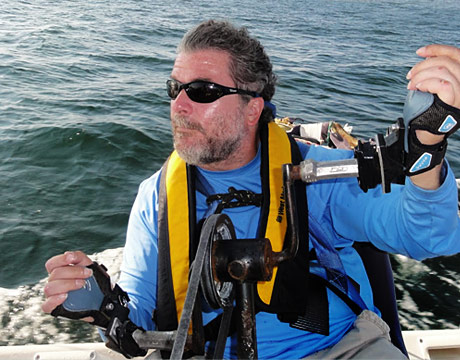 Richard Ramos steering a boat with the help of the sailing chair designed specifically for him. Image: RIT

Designing a Seat for Sailing

Richard Ramos hadn’t sailed competitively in years due to paralysis. But a sailing seat designed for those with physical challenges helped his teamwin third place in an event and the invention has continued to evolve.

“The original system amplified Richard’s arm strength by a magnitude and allowed him to steer the boat,” explains mechanical engineer Aleef Mahmud, who has been working on the seat since he was an undergraduate at Rochester Institute of Technology, where it waspart of acapstone project. “With the tiller of the boat, he could turn the boat in whatever direction he wanted and it allowed him to move around the boat without using his arms and legs and it protected him from the moving parts, such as the boom and sail.”

The steering was done with a crank mechanism. When you rotate the crank, it transmits the rotation of the crank load into a gearbox, which then transmits that load and allows it to be amplified,” Mahmud says.

Ramos could move around the boat because the system had a circular track that was based on a single pivot point. “So when moving from one side of the boat to the other, we used the value of gravity,” Mahmud says. “So if the boat tilted one way or the other, his position could be released so he could rotate around track.”

Now further improvements are being made to the invention, partly through working with non-profit Community Boating, Inc. (CBI), Mahmud says. “CBI wanted a system similar to the kind created but one that could fit in any sonar boat and accommodate any kind of user,” he says. “What we did was put together a project plan. We started in the beginning of 2015 and even went through an Indiegogo campaign for that and raised $30,000 to fund development.”

Improvements have included making it so the platform itself would be able to raise or drop based on how low the floor was and also adding different handholds and accommodating how to attach to the floor or the back of the tiller, he says. “There were incremental notches to change attachment points and we had to make sure we have enough points of adjustment in the crank, within the seat, and you could be as close to the crank or be as far as you wanted to be.”

Goals are to have advancements in the universal system for any kind of boat but also the kind of electromechanical components that can allow a user to have more functionality by picking up responses from the body.

”You’d like the system to get to the flip of a switch or turn of the dial for the user to move things as they please,” he says.

But despite the goals of future improvements, Mahmud says what’s been accomplished so far is still a tremendous feeling. “It’s meant so much to see someone be overwhelmed with joy as they go out sailing like maybe they couldn’t before,” he says. “It’s beautiful to be a part of in some way.”

For Further Discussion
It's meant so much to see someone be overwhelmed with joy as they go out sailing like maybe they couldn’t before.Aleef Mahmud, Rochester Institute of Technology