How to Design a High-Performance Hang Glider

How to Design a High-Performance Hang Glider 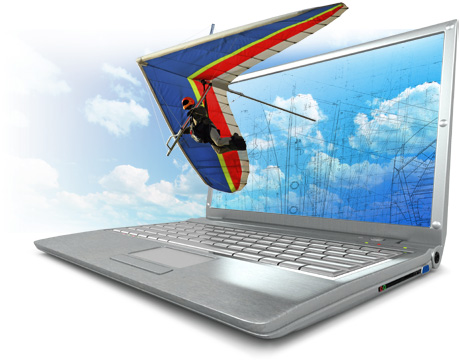 When you think of the airplane, it's easy to forget that the hang glider was one of the forebears. While its popularity isn't what it once was, it still has a fiercely loyal group of consumers. How do you design one? Well, it's not exactly as easy as fashioning a paper airplane.

"Hang gliding has been a continual elevation in development of technology and performance," says Wills Wing Designer Steve Pearson. "The Wright Brothers gliders were also hang gliders, a foot-launch soaring aircraft. Then, all through the 1930s to 1950s people were flying off hills. In the late '60s and early '70s, the Regallo-type plane and the evolution of that product exceeded anyone's wildest expectation for performance and soaring capability. The improvements equally considered performance and controllability and flight testing was done with rigid wings and conventional aircraft structures."

Today, he says there are two types of hang gliders: rigid winds and flex wings. "95% are flex wings and that's what our company makes," he says. "With flex you have triangular structure; it should be fairly rigid and anchored to air frame. Control is by weight shift but shift is not what turns the glider. Weight displacing activates sail to initiate the turn, but the standard control bar structure has to be focused on well. Really, by many it's identified as the essential structural component that allows hang gliders to develop."

One particular model, their Falcon single surface glider, has a crossbar tube to support the sail and positive loads are exposed—there's more drag and it is easier to control. "The Falcon and rec flyers are limited in speed range though—max efficiency is 23 mph," Pearson says.

For high-performance gliders, he says design has dispensed with top rigging—there's nothing on top of the wing and all the structure for negative loading is transferred to a large carbon composite structure with two crossbars inside the sail.

Pearson says the world distance record is 475 miles from point of release to where it landed 11 hours later but he thinks it can be beaten. "We've seen distance records go from flying down the hill five miles to hundreds of miles," he says. "The 300-mile mark was on one of ours and, at that time, it was hard to imagine going faster….And now that mark seems like a long time ago."

As far as the future of the business, that may not be as technical as emotional. Pearson says it's up to enthusiasts to share their enjoyment with others, pass it down through the generations. "I think gliders can be even more unique but it requires money to be put into testing and more people have to express an interest..." he says. "It's incredible to watch someone hang glide, a person flying that far."

The Wright Brothers clearly thought so.

It's incredible to watch someone hang glide, a person flying that far.Wills Wing Designer Steve Pearson