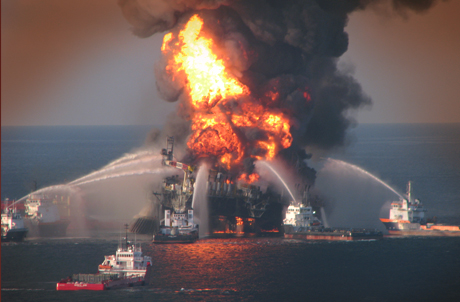 The April 20, 2010, explosion on the Deepwater Horizon drilling platform that took 11 lives and spread a massive oil spill in the Gulf of Mexico has focused attention on the safety of offshore oil and gas well drilling. Just what caused the massive blowout? What steps do drillers take to prevent blowouts? Why didn’t those work and what should be done differently in the future?

As of yet, we still don’t have all the answers. What we do know, though, is that oil wells will continue to be drilled under ocean depths of 3,000 feet, putting equipment under high pressureof more than 2,300 pounds per square inch. This is what makes getting natural gas and crude oil out of the briny depths so difficult. From the moment a drill bit penetrates the reservoir, a race is on to ensure that blowout—a surge of oil and gas up the well bore—won’t occur.

To maintain appropriate pressure and keep fluids from seeping into the surrounding rock, a fluid made of barium sulfate-enhanced mud is added to the well bore. Once desired depths are reached, a casing wider in diameter than the drill pipe is lowered into the well. Next, a cement slurry, containing additives to keep it from hardening on its way down, is pumped into the annulus, the space between the casing and the rock, displacing the “muddy” drilling fluid.

That cement creates a watertight seal between the oil- and gas-bearing rock and the well bore. To ensure that seal is tight, two, sometimes three, pressure tests are performed at two-hour intervals, and cement slurry is injected at high pressure to fill any leaks in the cement sheath that are detected. For the final step, drillers position a cement plug that operating personnel will drill through to let the oil and gas flow into the wellbore once production begins.

It appears that no major problems occurred during the Macondo well’s drilling conducted by Transocean, Ltd., the world’s largest offshore drilling contractor. And two of the tests performed on the cement seal by Halliburton Services, the largest cementing services company, indicated it was tight. A third test, however, provided anomalous results, which Lamar McKay, president of BP America, later called “worrisome” during testimony to the House Committee on Energy and Commerce. In the same hearings, Steven Newman, president of rig owner Transocean, said the tests indicated “something happening in the wellbore that shouldn’t be happening.”

In the Macondo blowout, just before Halliburton placed the final concrete plug, high pressure forced the oil and gas into and up the wellbore. The blowout preventer valves and the shear rams designed to cut through and seal the drill pipe failed, allowing the oil and gas to surge up to the rig floor and trigger the fatal explosion. The subsequent escape of hydrocarbons created the massive oil spill that hit the Louisiana coast in mid-May.

The Macondo blowout preventer had been deemed by maintenance records to be in good operating condition, so its failure is mysterious. Investigators focused their attention on whether modifications made over the years could have contributed to why its valves did not close. Leakage of hydraulic fluid from the valves might have been a contributing factor.

The blowout preventer’s shear rams, the final line of defense, may also have come up short. To allow for the high water pressures of great ocean depths, the drill pipe used was much thicker than the standard variety. It may be that the shear rams weren’t strong enough to make that crucial cut.

Until forensic tests of the blowout preventer, now underway at a NASA facility in New Orleans, are complete it’s impossible to know its role in the failure. It is safe to say, however, that probably no one single cause triggered the blowout.

More likely it was multiple failures in critical systems that set in motion the fatal chain of events that plunged the Gulf Coast into disaster.

[Adapted from “Avoiding the Blowout,” by John K. Borchardt, for Mechanical Engineering, August 2010.]

From the moment a drill bit penetrates the reservoir, a race is on to ensure that blowout—a surge of oil and gas up the well bore—won’t occur.