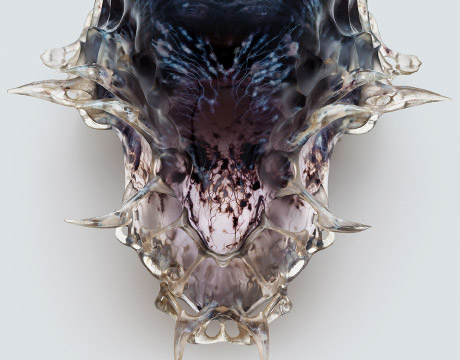 A mask designed by Neri Oxman and her team as part of The New Ancient collection at London’s Design Museum. Image: Danielle van Zadelhoff

In late November, Vespers, a series of death masks designed and printed in three dimensions by Neri Oxman and her group at the MIT Media Lab, went on display at the London’s Design Museum Fear and Love exhibit.

Vespers demonstrates how fear and love, death and life, are entwined. The masks play with the complexity found in nature and in computational techniques, Oxman says.

A professor at the MIT Media Lab, Oxman leads the Mediated Matter Group, which creates biologically inspired design fabrication tools that serve as a bridge between the natural and the man-made environments.

For example, the death masks, which have been divided into three series, are made up of five masks each and are on display sequentially at the museum through April 23.

In the past, death masks were made of a single material, such as wax or plaster, poured over a recently deceased person’s face. They were a way to keep the dead alive in memory. The masks were also believed to strengthen the spirit of the deceased and guard their soul from evil spirits on their way to the afterworld, Oxman says.

Her team sought a way to marry the art and design of these masks and the civilizations they sprang from with today’s most advanced technologies, she adds.

With that in mind, she and her team called upon computer modeling and 3D printing technologies to bring the masks to into the present and thus explore their deeper meanings, Oxman says.

The Vespers show is the second series of The New Ancient collection at the museum, which is sponsored by the 3D printing company Stratasys. The masks were designed within a computer program developed at the MIT Media Lab and printed with a Stratasys printer.

The masks are made from natural minerals. The colorful swirling layers were inspired by one of Oxman’s previous masks, named Lazarus, and are intended as a reference to the Biblical Lazarus’s last breath, she says.

The group designed the inner structures of the masks to match the resolution of structures found in nature, Oxman adds.

The death masks depict five imaginary martyrs. Each martyr is memorialized three times, through interpretations at moments in their past, present, and future, Oxman says. Thus, the exhibit’s 15 masks are divided into three categories: Past, Present, and Future, each of which will be displayed separately.

Past looks at historic origins and explores life through the lens of death. Inspired by ancient masks, the series uses five material combinations to emulate colors commonly found in cultural artifacts across regions and eras.

Present explores the transition between life and death and reflects the progression of the death mask from a symbolic cultural relic in Past to a functional biological interface in the Future. Visually, the surface colorations and geometries seen in the first series are transformed into volumetric material distributions housed within transparent, smoothly curved dome-like structures in the second, Oxman says.

The masks seen in Future are somewhat biologically augmented in their design. The changes are used to explore whether the death mask can drive the formation of new life. The masks are seen in this series as objects that can serve as an interface with living organisms, she adds.

Many of the Mediated Matter Group’s projects use 3D printing and fabrication techniques. They include the Silk Pavilion, spun by silkworms released onto a nylon frame, G3DP, a 3D printer that prints in glass along with a set of glasswork produced by it, and collections of 3D printed clothing and wearables worn in couture shows and by performers like Björk.

In June 2013’s Silk Pavilion, the MIT researchers created a dome from silk fibers woven by a robotic arm and finished by live silkworms at the lab. The team programmed the robotic arm to imitate the way a silkworm deposits silk to build its cocoon. The arm then deposited a one-half-mile-long silk fiber across flat polygonal metal frames to create 26 panels. These panels were arranged to form a dome, which was suspended from the ceiling.

The next year, in November 2014, the team created four 3D printed “wearable skins” designed to facilitate synthetic biological processes that might one day allow humans to survive on other planets, according to Oxman.

For that display, they also collaborated with Stratasys to create structures with varied rigidity, opacity and color. They used the 3D printer to 3D print the skins in a range of plastics with different densities, each one suited to a different planet in the Earth’s solar system.

“The future of wearables lies in designing augmented extensions to our own bodies, that will blur the boundary between the environment and ourselves,” said Oxman at the time skins were displayed within the lab.

For Further Discussion
The masks seen in Future are somewhat biologically augmented in their design. The changes are used to explore whether the death mask can drive the formation of new life. Prof. Neri Oxman, MIT Media Lab

Video: Hyperloop: The Future of Travel