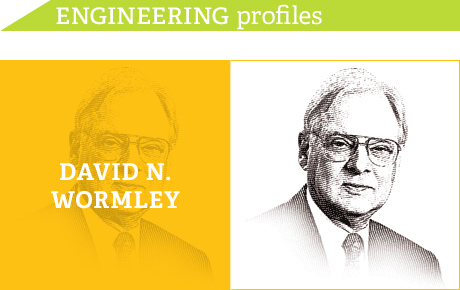 He is the son of an engineer and remembers taking tours of the factory where his father was a manager. He recalls that he was asked in junior high school to write an essay on what he wanted to be. “At that point, I said I wanted to be a mechanical engineer,” he said. “As fate would have it, I have certainly followed that plan.”

Today, David Wormley, Ph.D., is the Harold and Inge Marcus dean of engineering at The Pennsylvania State University. According to Dr. Wormley, “This is an especially propitious time for engineering and mechanical engineering. In these recent times I think it’s very clear that there is much more national appreciation and interest in the contributions that engineering can make both to the national economy and to many of the major pressing issues that we face in the country.” He added, “When we look at the impact, or the potential for impact of engineering in the nation, I think that it’s never been greater.”

Dr. Wormley is recognized with Honorary Membership in ASME for exceptional leadership in the engineering profession and educational field, including service on numerous governmental and university committees.

Before Dr. Wormley joined Penn State, in 1992, he was a faculty member at the Massachusetts Institute of Technology, where he served as head of the Department of Mechanical Engineering and then as associate dean of engineering.

His research is in the area of dynamic systems and control with applications to transportation systems, fossil fuel power plants, and fluid power systems. He has worked closely with industry and currently serves on the boards of the Michael Baker Corp. and the Sun Hydraulics Corp.

His research is described in more than 100 papers and reports, and he is co-author of the textbook System Dynamics: An Introduction (Prentice Hall, 1996).

Dr. Wormley is a Fellow of the American Society for Engineering Education, where he served as president (2006-07). He also served on the editorial advisory board for the Journal of Engineering Education (1991-2002), and was chair of the Engineering Deans Council (2001-04) and the Council’s Public Policy Committee (2000-01).

There is much more national appreciation and interest in the contributions that engineering can make.David N. Wormley Article
Cavitation Studies in Soft Tissue Could Lead to Improved Treatments for Concussion and Other Health Conditions
Researchers have developed a computational model that describes the dynamics of cavitation bubbles in soft porous materials. The new model embedded bubbles into deformable porous materials and shows how it slows the collapse and expansion of cavitation bubbles. Article
Self-Driving Cars Could Soon Have Their Own Special Memories

Autonomous Technology Collection
Detection systems for future autonomous vehicles are using an algorithm that enables learning to collect data while driving or parked so self-driving cars get safer and smarter over time.