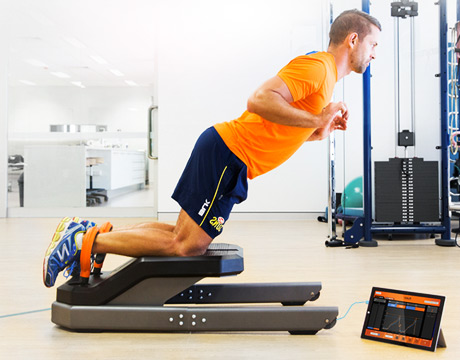 You’re running hard, finding your stride, and then all of a sudden—a twinge. You probably don’t think about them. You may not even have ever looked closely at them. But your hamstrings, those cord-like muscles on the back of your legs, can be vulnerable, maybe even ready to snap. The reason are many, from atrophy to imbalance with your quadriceps, but they can have an athlete on the floor writhing in pain and possibly unable to perform normal low-level physical activity for a lengthy period of time.

The NordBord was invented to help athletes stand up to the issues of these often overlooked muscles, quantifying muscle strength in the commonly used Nordic Hamstring Exercise (NHE)—in kneeling position and going forward, until falling.

Sam James, chief technology officer of Brisbane, Australia-based Vald Performance, the company behind the NordBord, explains: “Research had shown that the NHE was already protective against hamstring strain injuries, but, at the time, there was no way to measure it. Hamstring strains are a common and costly problem for many elite sporting teams, so the doctors were motivated to better understand the risk factors associated with this injury, and were determined to measure them. For this reason, they created the first NordBord.”

According to James, the NordBord is made up of over 200 components, including custom metal, sensors, and electronics assemblies. The structural frame contains steel and aluminum and there are hooks that restrain the ankles for that kneeling position, he says. Load cells, which are precision force sensors, connect to the onboard computer. It all works together to, among other things, measure isometric and eccentric strength.

“The NordBord collects streams of force data from each leg during the NHE,” he says. “This data is transmitted from the NordBord’s sensors and it’s visualized to view. On the ScoreBord app, key metrics such as maximum force and imbalance between limbs are displayed along with historical values for comparison.”

The NordBord, developed by Dr. Anthony Shield and Dr. David Opar, underwent a number of design changes to improve areas such as accuracy and durability, James says. This included centralizing the NordBord’s computer (it had previously usedtwo) to improve reliability, stripping down the frame.

Future tweaks to come? “While minor improvements will still be made, the NordBord’s futureevolution will occur primarily in its software, as Vald Performance enhances its data collection and analysis capabilities,” says James.

The NordBord is currently being used in the sporting world, including by 13 National Football League teams, James adds. Check the NFL’s injury reports and you’ll know why any potential hamstring help has to be considered.

While minor improvements will still be made, the NordBord’s future evolution will occur primarily in its software.Sam James, CTO, Vald Performance