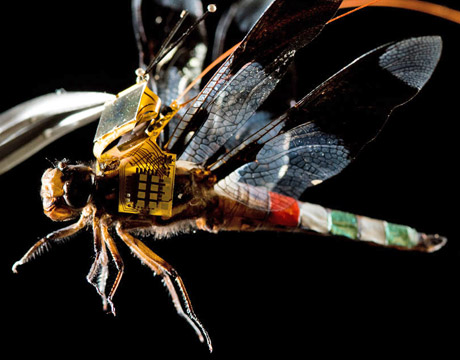 DragonflEye is a drone that uses live dragonflies to fly. Image: Draper Laboratory

Cyborg Dragonfly Takes to the Air

Swarms of tiny, insect-like robots may someday do our dirty work, taking air samples in hazardous or inaccessible environments, searching out survivors in disasters, and maybe even hunting down an enemy.

In recent years roboticists have made great strides in producing the miniscule flyers that might perform such jobs. But however miniature and ingenious their inventions, they all are faced with the same problem: power. At small scales, manmade wings aren’t strong enough to carry their own power source. Or, to put it another way, batteries are just too heavy for tiny wings. As a result, few insectile robots can stay aloft for any useful duration.

The answer to the problem of powering tiny flight may be to give up trying to imitate life. “Why are trying to mimic biology?” asks Professor Jesse Wheeler, a biomedical engineer at Draper Laboratory. “Why don’t we leverage what it’s doing already—have a manmade system for guidance and navigation, tell it where to go, and let it handle all the rest.”

In other words, instead of making a bugbot, make a bugborg.

To do so, Wheeler turned to the dragonfly, an extraordinary aviator among insects. It can cross oceans, reach speeds in the 20s of miles per hour, can hover, can fly straight up and straight down, and catches all its prey mid-flight. It also has a simple, well-studied nervous system, with 16 neurons known to be devoted to navigation.

If Wheeler could stimulate those neurons, he might be able to override a dragonfly’s decision-making process—whatever that might be—and make it go where he wanted it to.

Stimulating just those navigational neurons is not so simple. They are bundled with thousands of other neurons in a dragonfly’s hair-thick nerve cord, which runs the length of its body, much like a spinal cord. Fire an electrical pulse, no matter how small, at the navigation neurons and you’ll be sure to stimulate hundreds of surrounding neurons as well.

So Wheeler and his colleagues decided to engineer the neurons so that they would be sensitive to something other than electricity. They used some gene snippets known to make the retina sensitive to light and added it to the 16 navigational neurons. Now, when a light hits them it has no effect on the surrounding neurons.

This feat of bioengineering raised a new problem. How were they to get light signal from the dragonfly’s wee backpack into the nerve cord? Fiber optic cable, though flexible over long distances, is too brittle for the kind of hairpin bend they needed. They used a tiny optrode to wrap around the cord at one end and attached to the backpack at the other.

The backpack itself folds like a piece of origami, has miniature solar pyesanels, and can wirelessly transmit data, in addition to controlling the insect with light pulses.

Though “DragonflEye,” as the engineered robobug has been named, has yet to be steered by someone other than itself, all the parts—the bioengineered cells, the MEMS backpack, and the optrodes—have come together in a mere year and a half. Wheeler attributes the speed of development to the plethora of engineers at Draper.

“We have about 2,000 multidisciplinary engineers who can help develop things very quickly and can solve problems on demand,” he says.

This spring the buzzborg took its first flight.

“As soon as we let him go, he took off,” says Wheeler. “We had to chase him around, had a little game of tag going on. It was really exciting to see that the dragonfly was able to get away from us. A lot of work went into that.” Michael Abrams is an independent writer.

For Further Discussion
Why are trying to mimic biology? Why don’t we leverage what it’s doing already—have a manmade system for guidance and navigation, tell it where to go, and let it handle all the rest.Prof. Jesse Wheeler, Draper Laboratory