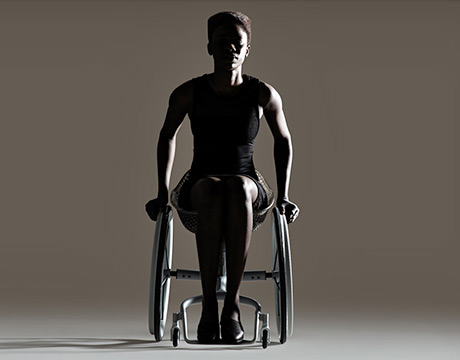 How many owners have a seat in their car that truly shapes to their body? And how many can say the same about their favorite chair at home? But let’s say we’re talking about a wheelchair. Says Benjamin Hubert, design director of Layer, based in London, UK: “With wheelchairs, many people don’t have nearly enough choices. And when you think about how people rely on wheelchairs, with better customization, what a difference it could make.”

And that’s what Hubert’s team might just be able to do: make a difference. As it has with many attempts to improve physical comfort, the 3D printer is very much at the center of this mission, creating the seat and footrest of the custom models created by Layer.

“The project started with looking at the wheelchair category but 3D printing came later,” he says. “We found there just wasn’t enough being done for users, from asymmetry to body shape and more. Research is so critical in our work. Biometric data is key, with the user creating data points and it’s translated through algorithm to generative structure and the structure is different each time. The computer can’t entirely measure, so manual human assessment is used in combination with data being translated.”

Part of the design comes from users being fit into foam, he says. The foam is a pre-mold, with the user sitting in the foam. It then cures to hold the shape and then is sent to be 3D scanned.

Among the many aspects of a customized chair, one might not think about the comfort of users’ feet, but it’s critical to the user experience, Hubert says. “We can scan people’s feet and work with insoles,” he says. “A leading problem is that users can find that their feet will turn in and that’s an area of strong frustration.”

But customization is also about determining the features certain users don’t want, he says. “For one person who gave us feedback, they’d go out with friends and find they’d push them with assisting bars and without permission,” he says. “They felt like a doll.”

There is also a clear need in the area of style, he says. “They can be very mechanical, boxy frames and many users would like a better visual,” he says. “Many users want to be seen first, head-on, instead of the chair.” One current design is a specific frame that works with a 3D printing system. “You can’t just retrofit the seat to any existing frame,” he says. “The frame for the design is a single-post, sort of T-shaped framework. The seat mounts on to the single post. That single post set-up allows for freedom of flexibility.”

The printer utilized for the prototype is an industrial-sized type called “Mammoth,” approximately three meters by one meter, he says.

Though the work so far has been encouraging, Hubert says, he’s quick to remind that they’re still in prototype mode. “It’s not simple when you think of a prototyping process and then, on top of it, that it’s the medical industry,” Hubert says. “Challenges include cost and efficiency of the process. It’s a positive process but you still have to remember that this can take a decent amount of years to get to the end.”

Hubert says the present estimate is that the product would get to the user in two weeks, with the actual printing time being approximately three days.

“As a designer, your ambition is to solve problems and make things incrementally better for people,” he says of the project, which has also involved extensive road testing. “These users deserve a chair that fits them well, in many ways.”

As a designer, your ambition is to solve problems and make things incrementally better for people. These users deserve a chair that fits them well, in many ways.Benjamin Hubert, Layer