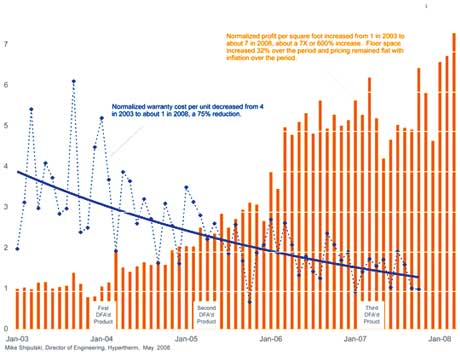 Dell is offered up again and again as the prime example of customized manufacturing done right and done successfully. Shortly after its founding in 1984, Dell began a configure-to-order approach to manufacturing. Customers choose from multiple options for their own computers on the Dell Web site and then the computer is manufactured.

Manufacturers—particularly electronics manufacturers—have been taking notice. Many of them are investigating how the configure-to-order model could be put to use at their own companies and some have implemented the method—along with the necessary software to get the job done—with great success. Their approaches follow the Dell model: same basic parts, many configurations; and the capability to assemble the product to order and get the product out the door quickly.

Count Down the Parts

Hypertherm Inc. of Hanover, N.H., maker of plasma metal cutting equipment, is one such company. About two years ago, company executives sought a way to offer customers a broader Edge Pro product line with more options than in the former product line.

"We wanted to take a subset of very robust parts and easily assemble them into different configurations," said John Sobr, head designer on the project. "We reuse what’s good by creating many flavors of the product, but all the parts are designed to play nicely together." While Hypertherm customers don’t have as many options to choose from as Dell customers, they are able to pick among many more features than in the past, and—in tandem with the company’s lean manufacturing process—the product is assembled shortly after the request.

"Modularity" is the word that Mike Shipulski, engineering manager at Hypertherm, uses to describe his company’s new manufacturing model. Modularity builds on a series of loosely coupled subassemblies that can be configured in various ways to broaden the product line, offer a more customized product, and slash manufacturing costs.

Spend Half the Time

The Edge Pro product can now be assembled in half the time using 27 percent fewer parts, according to Sobr. "We made the system more modular," he said. "We had to make the parts multitask. It’s like, if you made a transmission that could work for a car, a truck, and a dump truck. It’s the same component, but has to be more versatile so you have to add complexity."

Engineers analyzed existing products and assembly techniques. This included counting parts and documenting assembly steps—a seemingly tedious process, yet one that yielded a chart to serve as a baseline to measure the success of the new design and seek new opportunities for improvement. They coupled that chart with feedback from customer surveys from CNC installers, customers, and machine operators, who spoke about their own hopes for a future product line. Engineers paid attention to that feedback to stay on the right track with their market.

They also obtained input from operators on the assembly floor, asking them how to speed the assembly process while keeping it straightforward and easy to execute. Operators suggested simpler harnessing systems, easier access to components within the CNC equipment, and less manipulating products on the line.

Ultimately the redesign benefits ripple beyond the assembly line. "In fact, the benefits are felt throughout the facility from the UPS drivers who bring fewer boxes of parts into our facility daily, and our procurement people who have less to worry about now with the lower variety and quantity of parts to purchase," Shipulski said. But the greatest benefit is selection. Customers can now choose among products suited to their needs and their budgets.

Ultimately the redesign benefits ripple beyond the assembly line.