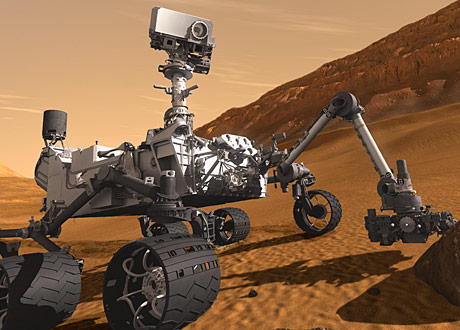 Carrying the most advanced payload of scientific gear ever used on the Martian surface, the Mars Science Laboratory (MSL) Curiosity Rover launched in November is about 10 times larger in mass and capability than the earlier MER rovers that arrived on Mars in 2004.

The rover's robotic arm (RA) is a critical mechanism to the MSL's mission. It acquires, processes, and handles samples from the surface of Mars and delivers 5 of the 12 science instruments. The robot arm, with five degrees of freedom, is very similar to robotic arms used on earth, but it is designed to survive the large temperature changes in space.

Made mostly of titanium, it is lighter than steel but has similar thermal expansion properties as the steel bearings in its joints when the temperature swings from about -110 degrees C at night to +50 degrees C during the day. Many engineering improvements were made over the last two rovers to create a new robotic arm capable of carrying more instruments with expanded capabilities and surviving a lifetime seven times longer than any previous in-situ planetary mission.

MDA Information Systems, Inc. developed the MSL's arm and has designed and built every other robotic arm successfully deployed and operated on the surface of Mars since the Viking landers. Rius Billing, director of engineering,notes some of the most important differences between the new robotic arms and those from the MER (Spirit and Opportunity) and Phoenix programs.

Not only is the MSL rover larger, but the RA is larger and heavier as well. It carries five instruments on its turret. In addition to an MAaHLI microscopic imaging camera and an alpha particle X-ray spectrometer, an arm-mounted drill is capable of capturing rock samples from the Martian surface.

Billing says the Curiosity's robot needs to provide pressure. "The instruments and drilling tools on the end of the arm are now larger to obtain better samples," he says."On the MER, robotic arms touched the Mars surface but didn't apply pressure. The robot lifted and lowered equipment into place. On the MSL, the robot not only places instruments, but also provides loading for equipment like a drill."

Another new instrument carried by the RA is a Chimera rock crusher that sifts and crushes dirt and rock removed from the ground by the drill. It uses gravity, vibrations, and coordinated arm movements to deliver sorted samples to rover-mounted science instruments.

Finally, the RA carries a "Dust Removal Tool," a brush that cleans rock surfaces for imaging. A brush was present on MER that scored and polished surfaces a bit, but the brush on MSL provides a more gentle touch so sample gathering and acquisition can be done with other tools on the arm.

Billing notes that handling the heavier arm was more complicated since it could no longer be lifted by a single person. Designing, making, and testing mechanical ground support equipment became "almost a project unto itself."

A flat "paper thin" flex conductor cable on the MLS RA is an efficient use of mass and volume. The flex cable is unique in that it spans from the rover bulkhead to the instrument turret in a single piece, and about 10 m of flat flex cabling is required to get the range of motion required in the 2-m long arm. The flat cable design also offers thermal benefits over using round wire since it is more flexible in cold temperatures.

Robotic arm cabling on MER only required about one-fourth as many conductors. On Curiosity, about 600 conductors support the actuators and the rest support the instruments.

Since the MSL RA and the equipment it carries are so massive (more than 100 kg), a complex dual-purpose lock and re-stow system helps keep mass and volume down and provides protection in multiple modes.

During launch, the arm is tightly locked by a caging mechanism so it is capable of surviving landing loads of over 20 g. After deployment on the Mars surface, the same caging system was designed to passively re-stow and protect the arm and instruments to survive loads up to 8 g during rover driving maneuvers.

This was "an interesting design problem" according to Billing, since the titanium arm mounts to an aluminum panel on the front of the rover, with a vastly different CTE. It was important that the caging system not over-constrain or bind the RA during large temperature swings.

Their solution was to fully constrain the instrument turret in 6DOF (degrees of freedom)at launch, and "only constrain the elbow in directions needed to protect the actuators and structure, allowing the arm to expand and contract relative to the rover front panel," Billing says.

Protecting the latching mechanisms, flex spools, and cabling against rock, dirt, and sand pebbles is critical on the MSL arm since the system contains a large drill and a rock crusher and tends to get very dusty, says Billing.

Phenolic seals were included at each rotating interface entering and exiting the flex spools, and their protection was verified with life testing to ensure that dirt couldn't get between the layers of flex cable, causing abrasion of the outermost protective layers over time. They also designed large enough dimensional tolerances so dust wouldn't stick.

MSL is expected to land on Mars in August 2012, and the newly designed systems put to test. Until then, expected operation of the MSL and robot can be seen in this video animation.

On the MER, robotic arms touched the Mars surface but didn't apply pressure…On the MSL, the robot not only places instruments, but also provides loading for equipment like a drill.Rius Billing, director of engineering, MDA Information Systems, Inc.