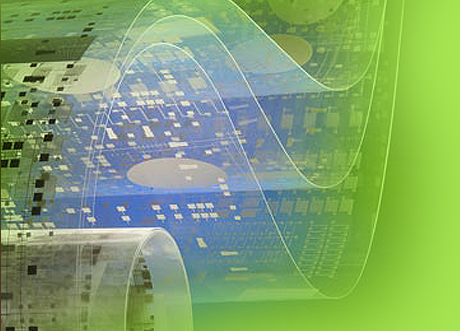 Printed electronics on plastic or flexible substrates are in everything from photovoltaics and lighting to RFID tags and cell phones. Options for printing simple circuits inexpensively are replacing expensive wafer fabrication methods.

Novacentrix, Austin, TX, an ink and printed electronics equipment supplier, is solving some of the mechanical challenges of functional inks on flexible substrates, enabling cost-effective processing of more substrates and inks for the electronic printing industry. While similar technology is offered by other vendors such as Xenon Corporation and Dresden Thin Film Technology GmbH, Novacentrix is focusing on scaling production-worthy equipment, helping propel growing market demands.

Functional inks consist of nanometer-sized particles in a carrier liquid and typically contain another liquid (capping group) that prevents them from aggregating in solution. Chemically compatible inks are chosen to match the substrate they will be printed upon (coefficient of thermal expansion, surface tension, surface energy, ph). As printed, they form porous thin films that remain on the surface of the substrate.

Once they are patterned, their liquid additives are no longer wanted, and they need to be cured to be activated. The curing process dries out the ink and sinters the particles, usually using heat at high temperatures, which substrates such as glass, ceramics, or wafers can tolerate.

However, paper, plastic, or other thin flexible films such as mylar can only be heated to around 150 °C, much lower than temperatures needed to drive away unwanted liquids.

NovaCentrix addressed this challenge by developing the PulseForge toolset that delivers intense pulses of light from large flashlamps for short periods of time onto the surface. The tailored-high voltage, high-current, broadband spectrum lamp output provides an energy-efficient way to heat the film's surface to the needed temperatures, which can exceed 1,000°C. By curing in less than a millisecond, the top layer is heated long enough to be dried and sintered, leaving the ink purer and more uniform in chemistry and mechanics, without heating or damaging the back of the substrate.

"Since the photonic curing process is so rapid, there is not enough time for the substrate's mechanical properties to be significantly changed," according to Dr. Kurt Schroder, chief scientist at Novacentrix and inventor of the process.

After working with a variety of inks and substrates for more than five years, company officials say the trade-offs involved in process optimization to eliminate the most common damage mechanisms are now understood. Curing time, power, temperature, lamp frequencies, and other process conditions are adjusted depending on the specific film stack. Pre-drying with lower pulses of light can prevent adhesion failure due to gas generating in the film if it has too much solvent.

Not only are the cured films subject to functional testing--they must conduct electricity, exhibit semiconducting properties, or act as dielectrics, and pass electrical tests such as sheet resistance, humidity, life-cycle testing, or high temperature testing--they must also survive and adhere during processing, testing, and use.

Printed circuits that will be used for touch-based sensors or touchscreens have additional standards relating to wear and durability, and some applications may need oxygen or water barrier coatings, such as with OLEDs.

Novacentrix's processes work with a variety of inks and coatings, including copper, silver, semiconductors, and organics, on paper, PET (the most common plastic substrate used in printed electronics), and many other substrates.

Most importantly, these processing tools are compatible with high-speed printing processes. They allow continuous mass processing of square kilometers of printed material on rolls moving up to several hundred meters per minute. That is not as fast as newsprint, but is very fast compared to circuits produced in a fab plant, and is cost-effective.

Their newly patented process now runs on scalable manufacturing tools with automation, software controls, intelligence for closed-loop corrective action feedback, and advanced simulation tools. Products like these are helping printing flexible electronics become more of a science than an art.

Debbie Snidermanholds an MENG from Cornell University, Ithaca, NY. She is an independent writer and regular contributor to Mechanical Engineering.

Since the photonic curing process is so rapid, there is not enough time for the substrate’s mechanical properties to be significantly changedDr. Kurt Schroder, chief scientist at Novacentrix