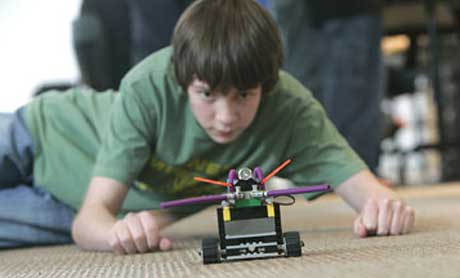 Youth involved with 4-H can learn about more than agriculture.

What does it take to change the world—or even your own community? A 21st century innovator needs creativity, communication skills, and a firm grasp of science, technology and engineering.

Sadly, American students lag in technical knowledge. Only 32.4 percent of U.S. undergraduates earn science or engineering degrees. In Japan, Germany and China, over 56 percent of students receive them.

Richard Mahacek, county director and 4-H youth development advisor at the University of California, was a 1960s 4-H’er. "In electrical projects, we made toy buzzers and electromagnets. It was an opportunity to internalize and understand electricity, not from a textbook, but from hands-on activities that brought concepts to life," he remembers.

Now a member of national science, engineering and technology (SET) programs, Mahacek teaches fifth through eighth graders about design, electricity, torque, gears, motion, and force via a robotics curriculum. "With fewer vocational and industrial classes, kids have little hands-on opportunity. They may get the right answer on a test, but have no idea how something works in real-life."

Five million 4-H science, engineering and technology projects take place, annually, in America’s communities. "We try to meld inquiry with experiential learning. They get a chance to explore, then apply their understanding to other applications," Mahacek said.

Some corporations provide national SET support. A 2008 Toyota grant provided nearly $1.5 million for 4-H2Online, an interactive learning experience involving water conservation issues and environmental engagement. The 3M Foundation funded The Power of the Wind, teaching how to use engineering principles to design and build alternative energy projects, with wind as the primary resource.

As part of the U.S. Department of Agriculture’s Cooperative Extension System, 4-H science and engineering programs, created by university researchers, are widely distributed, through school systems and partner youth groups. Instructors and community volunteers, at Cooperative Extension offices in every county, teach new curricula within months of approval.

Rapid dissemination allows 4-H projects to incorporate cutting-edge technology. Aaron Schroeder, a project engineer, credits a 4-H robotics club with honing mechanical engineering and communication skills. "We had to pay attention to detail and learn how to present our projects," said Schroeder. "When I became a 4-H junior leader, I needed a good understanding of what I was talking about so I could effectively communicate those principles to other people."

Some 4-H programs are rooted in its agricultural heritage. A Nebraska program uses robotics and geo-spatial principles to teach the science and engineering behind precision agriculture. "Kids work in teams with a ton of cool equipment," said Bradley Barker, a University of Nebraska-Lincoln assistant professor who helped create that curriculum. "In community mapping projects, kids take coordinates and build maps of their schools, so it’s personally relevant."

SET education stirs national debate. Educators, parents and politicians, agree that students should be encouraged and prepared for engineering and technical fields, but acknowledge that schools can’t do enough. Extra-curricular programs, like 4-H’s, rich in hands-on projects and adult participation, are filling the gaps.

[Adapted from "Growing a New Crop of Engineers," by Kathleen Jamison, for Mechanical Engineering, December 2008.]