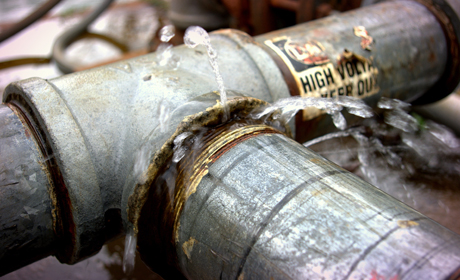 Pipe fatigue can lead to major problems like leaking.

Ray Kelm, mechanical engineer and owner of Kelm Engineering, based inFriendswood, TX,says pipe fatigue solutions have come a long way, with the field offering more opportunities than ever before.

“In years past, there was a simplistic screening process,” he says. “Pretty much when you would start up a plant, particularly new ones, you would screen the vibration on all the piping and when you saw it over a preset threshold you would try to reduce it. It was a very conservative standard.”

He says what’s happened lately is the more accurate calculation of pipe dynamics. “What we do with a lot of our business is measure the vibration and build numerical models simulating the field, and when we calibrate the model in the field, we can have accurate reading of stresses,” he says.

There are finite element programs and pipe programs to calculate pipe stress but the important issue is field measurement, Kelm adds.

Pipes are often overlooked and improperly assessed and the resulting losses can be devastating, Kelm says. “Pipe fatigue can create major leaks and you have other challenges. Fatigue isn’t just due to vibration but sometimes huge contributors are stressed erosion or corrosion issues,” he offers. “It can be some other external issues that influence it as well. By the time you are going through calculating you need reasonable, believable stress concentration factors to make sure of accuracy in predicting stresses.”

Kelm highlights another area that many in the business overlook—now that oversight has led to 40% of his business. “We’ve seen a tremendous increase in projects on reciprocating pumps,” he says. “Traditionally, they were just bought and would occasionally have some modeling work done for amplitudes and forced vibrations but with big pump manufacturers always offering a free pipe fatigue study, that’s opened up whole new areas. We weren’t doing any of that five years ago.”

Kelm believes a reason there are fewer workers in the field is also because it’s “very technical work that you need to be gutsy to do. If things go wrong, they go really bad from the risk of litigation," he says."But if you’re cautious you’ll be fine.”

“The most common big losses are from fire explosions from damaged mechanical equipment. That shakes a pipe in an unusual condition and breaks oil lines. It often starts fires on machinery they know is sick but don’t want to shut down immediately. If you’re running a refinery and can run it an extra three weeks before you shut it down then it’s that much more money. The other way, then it’s that much more money lost.”

Pipes are often overlooked and improperly assessed and the resulting losses can be devastating.