Constructing the Future with Flying Robots

Constructing the Future with Flying Robots 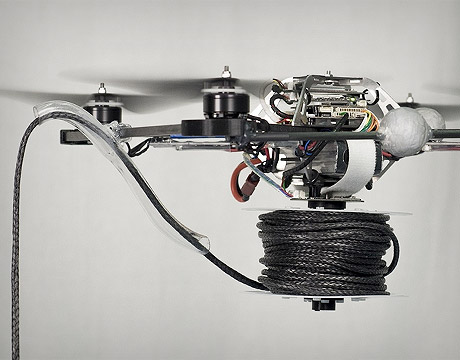 There are drones for package delivery, drones for search and rescue, drones for sensing, and drones for photography, among others. Now another application for drones has taken another step closer to reality: Drones for construction.

Researchers at the Swiss Federal Institute of Technology (ETH) Zurich have demonstrated that the flying robots they customized and programmed can then build a rope bridge between scaffolding without human intervention, and the bridge can support the weight of a person walking across it.

According to the researchers, flying machines offer a number of advantages over machines traditionally used to construct buildings and other objects because they can fly in and around existing objects and access places that may be difficult for non-aerial robots.

“We’ve done research and a lot of different projects with flying machines for a long time,” says Federico Augugliaro, lead robotic researcher on the project. Augugliaro, who recently was awarded a Ph.D. in science from ETH Zurich, and earlier earned an M.S. in robotics, systems and control from the same university, has been working on flying machines as part of his academic work. Another earlier project included dancing quadrocopters that demonstrated coordinated flight for a swarm of flying machines.

The projects are conducted in the ETH Zurich Flying Machine Arena (FMA), a state-of-the-art mobile testing space for aerial motion control research. The most recent construction, building the lightweight tensile structure with quadrocopters, built upon previous work and showed cooperative construction among the machines. According to the FMA website, quadrocopters are a machine of choice because of their agility, mechanical simplicity, robustness, and ability to hover.

“One area we decided to explore was flying machines interacting with their environment and [to do so by building] a structure that cannot be built in other ways by machines,” Augugliaro says. “We usually do some fundamental research to come up with methods and strategies that demonstrate what’s possible and demonstrate some concepts. With the bridge it was to showcase that flying machines can build a structure that is load-bearing. Instead of something more abstract, we went for a bridge because it is really tangible. You need a flying machine to make it work because you have to go around the structure and within the structure, and a crane or other grounded machine cannot do that.”

The rope bridge project was conducted in cooperation with the ETH Department of Architecture. Proof-of-concept of the main ideas came in 2011 when the team’s four quadrocopters built a 20-foot tall tower of 1,500 foam modules in 18 hours during a four-day-long live exhibition at the FRAC Centre in Orléans, France. The project was conceived as a 1:100 model of a 2,000-foot high vertical village. The exhibit at the FRAC Centre was one of the first structures built by flying robots.

Industrial robots have been explored for building structures for at least a decade, but there is a limit to the size of the project they can work on. Since flying machines don’t have the constraints of other robots being studied for building, research using full-scale structures is feasible.

“After that [the FRAC Centre demonstration], we wanted to build a structure that was realistic and load-bearing,” Augugliaro says. “We had to solve different things and develop, for example, the rope-deploying mechanism and create some new algorithms.”

The team used existing flying machines, which they customized with various components such as electronics and the rope-deploying mechanism to connect the scaffolding anchor points. A motorized spool allowed the robots to control the tension of the rope as it was deployed. The rope chosen was high performance polyethylene, used, for example, for yachts and winches.

According to Augugliaro, one of the biggest challenges was working with the ropes. “[It’s] difficult to predict how the rope will behave so you have to build a very reliable and robust system.”

The team then began developing the algorithms using information such as measurements of the scaffolding, where knots should be tied, what kind of knots would be used, similar information about braiding, and directions for all activities that would be required so that the machines would know what to do.

The machines did everything weaving in and out, braiding and tying knots to produce a bridge that consisted of nine rope segments with a total rope length of almost 400 feet spanning 24 feet between the endpoints.

For Further Discussion
One area we decided to explore was flying machines interacting with their environment and [to do so by building] a structure that cannot be built in other ways by machines.Prof. Federico Augugliaro, Swiss Federal Institute of Technology Zurich